In Search of Satisfaction (Paperback) 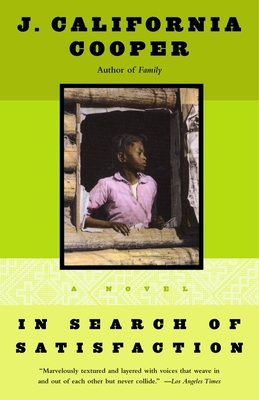 In Search of Satisfaction (Paperback)

By J. California Cooper
List Price: $15.95
Our Price: $10.00
(Save: $5.95 37%)
On Our Shelves Now
With In  Search Of Satisfaction, Cooper gracefully portrays men and women, some good and others wickedly twisted, caught in their individual thickets of want and need on a once-grand plantation.

In Yoville, "a legal town-ship founded by the very rich for their own personal use," a freed slave named Josephus fathers two daughters,  Ruth and Yinyang, by two different women. His desire to give Yinyang and himself money and opportunities oozes through the family like an elixir. In seeking the legacy left by their father, Ruth and Yinyang pull each other, their families, and their Yoville neighbors into a vortex of ever-powerful emotion.

J. California Cooper is the author of four novels and six collections of stories. She was honored as Black Playwright of the Year, and her work received the American Book Award, the James Baldwin Writing Award, and the Literary Lion Award from the American Library Association. She died in 2014.

"Marvelously textured and layered with voices that weave in and out of each other but never collide." --Los Angeles Times

"Cooper's...style is deceptively simple and  direct, and the vale of tears in which her  characters reside is never so deep that a rich chuckle  at a foolish person's foolishness cannot be heard." --Alice Walker

"An old-fashioned morality tale that quickly engages the reader in the lives of a large cast of unforgettable characters." --The Atlanta Journal-Constitution

"Cooper writes  about small-town life with a verve that nearly bursts off the page."
--Ms