Saviors and Survivors: Darfur, Politics, and the War on Terror (Paperback) 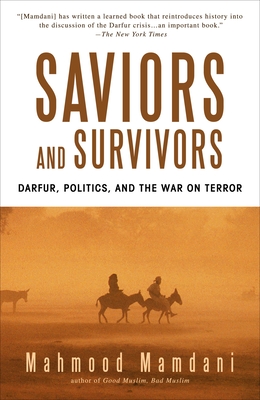 Saviors and Survivors: Darfur, Politics, and the War on Terror (Paperback)

By Mahmood Mamdani
List Price: $17.00
Our Price: $16.00
(Save: $1.00 6%)
On Our Shelves Now
From the author of Good Muslim, Bad Muslim comes an important book, unlike any other, that looks at the crisis in Darfur within the context of the history of Sudan and examines the world’s response to that crisis.

In Saviors and Survivors, Mahmood Mamdani explains how the conflict in Darfur began as a civil war (1987—89) between nomadic and peasant tribes over fertile land in the south, triggered by a severe drought that had expanded the Sahara Desert by more than sixty miles in forty years; how British colonial officials had artificially tribalized Darfur, dividing its population into “native” and “settler” tribes and creating homelands for the former at the expense of the latter; how the war intensified in the 1990s when the Sudanese government tried unsuccessfully to address the problem by creating homelands for tribes without any. The involvement of opposition parties gave rise in 2003 to two rebel movements, leading to a brutal insurgency and a horrific counterinsurgency–but not to genocide, as the West has declared.

Mamdani also explains how the Cold War exacerbated the twenty-year civil war in neighboring Chad, creating a confrontation between Libya’s Muammar al-Qaddafi (with Soviet support) and the Reagan administration (allied with France and Israel) that spilled over into Darfur and militarized the fighting. By 2003, the war involved national, regional, and global forces, including the powerful Western lobby, who now saw it as part of the War on Terror and called for a military invasion dressed up as “humanitarian intervention.”

Incisive and authoritative, Saviors and Survivors will radically alter our understanding of the crisis in Darfur.
Mahmood Mamdani is Herbert Lehman Professor of Government and a member of the departments of anthropology; political science; and Middle East and Asian Languages and Cultures (MEALAC) at the School of International and Public Affairs at Columbia University. His previous books include Good Muslim, Bad Muslim; Citizen and Subject; and When Victims Become Killers. Originally from Uganda, he now divides his time between Kampala and New York, where he lives with his wife and son.
“Mahmood Mamdani . . . is one of the most penetrating analysts of African affairs. In Saviors and Survivors: Darfur, Politics, and the War on Terror, he has written a learned book that reintroduces history into the discussion of the Darfur crisis and questions the logic and even the good faith of those who seek to place it at the pinnacle of Africa’s recent troubles . . . [An] important book . . .”
—Howard W. French, The New York Times

“Say ‘Darfur’ and horrific images leap to mind: Janjaweed, rape, genocide. But most of us would be hard-pressed to explain the violence there, beyond the popular notion that it’s ethnic cleansing of Africans by Arabs. Columbia University scholar Mahmood Mamdani’s brilliant new book, Saviors and Survivors, explains why this assumption is faulty, and why it’s foiling peace efforts.”
—Katie Baker, Newsweek

“Mahmood Mamdani . . . demonstrates just how politically charged the word ‘genocide’ has become, and how many shady agendas it can serve, even among those purporting to act in the name of universal values . . . His extensively documented study of the political and media circus that came to surround the hitherto uncelebrated province of Darfur is a vivid demonstration of the predictably calamitous results of outsiders meddling in places whose history, politics, and culture they can hardly be bothered to read up on.”
—Benjamin Moser, Harper’s Magazine

“Very few books on the Darfur crisis have provided such a good analysis of what is happening in the region and very few voices have attempted to understand the crisis in its local, regional, and international context. Very few books have attempted to discuss the crisis in its historical and geopolitical context. In reality discovering such an insightful book is like finding a needle in the sea.”
—Al-Quds al-Arabi (London)

“Whatever one thinks about Saviors and Survivors, the study and practice of contemporary Sudanese politics, humanitarian concerns, peace-making and peace keeping has received a jolt to the present paradigms that may get us all thinking at a new level of depth. Let’s hope that it will be lessons learned, and not repeated and congratulations to Dr. Mamdani for the clarity and courage to challenge conventional ‘wisdom’.”
—Richard Lobban, Bulletin of the Sudan Studies Association of the USA.

“There are three reasons why this book’s perspective on the Sudan-Darfur conflict may be of considerable value to readers interested in African politics and international relations. First, Saviors and Survivors is unique in that it presents an African-centered perspective on the Sudan-Darfur crisis in the context of the study of international relations, geopolitics and the War on Terror. Second, it draws attention to African regional, epistemological and ideological perspectives on the crisis. Third, it tackles the bogeyman of African politics—the national-ethnic question in the context of cultural pluralism . . . Hidden in the middle of Saviors and Survivors’ controversial thesis critiquing international interventionism is Mamdani’s scholarly genius. The book scrutinizes, critically analyzes, deconstructs and reconstructs the deep historical transformations that constitute the underbelly of the continent’s post-colonial citizenship structures.”
—African Affairs (London)

“Mamdani’s book is by far the most exhaustive study of the conflict and is carried out with an impressive display of investigative prowess and referencing . . . This study is reassuring in its learned dependence on a great variety of sources and an admirable depth of research. Indeed, the reader will discover that Darfur is not quite the mysterious and unknown place that we have tended to imagine . . . It is to be hoped that this book is widely read and debated.”
—John C. Caldwell, Population and Development Review

“[A] sweeping history of Darfur . . . Mamdani argues that calling the events in Darfur genocide is inaccurate and irresponsible . . . He believes that the West’s concern with Darfur is a preferred distraction from the failed U.S. occupation in Iraq, offering Western citizens a means to reclaim the moral high ground . . . [P]rovide[s] valuable historical and cultural background to recent events in Darfur and the sure-to-continue scholarly debate on genocide.”
—Veronica Arellano, Library Journal

“Mamdani traces the path to the Darfur tragedy through its historical and colonial roots to the current situation, where drought and desertification have led to conflict over land among local tribes, rebellion, and finally to the brutal involvement of the forces of the state and to the efforts of the United Nations and others to help the victims and stop the violence. His radical reevaluation of the Darfur problem is a major contribution to understanding and, it is to be hoped, to ending a shocking human disaster.”
—Sir Brian Urquhart, former Under-Secretary-General of the United Nations

“A brilliantly argued and profoundly challenging critique of liberal support for humanitarian intervention in Darfur. Beyond this, Mamdani sets forth an alternative approach to such catastrophic situations. This book should be required reading for the Obama foreign policy team.”
—Richard Falk, United Nations Special Rapporteur and Professor Emeritus, Princeton University

“An incisive and challenging analysis. Framing both Darfur’s war and the ‘Save Darfur’ movement within the paradigm of the West’s historic colonial encounter with Africa, Mahmood Mamdani challenges the reader to reconsider whether Darfur’s crisis is ‘genocide’ warranting foreign military intervention.”
—Alex de Waal, Fellow at Harvard University’s Kennedy School of Government and author of War in Darfur

“Mahmood Mamdani has turned his fearless independence of mind on Darfur, Sudan, and the so-called ‘War on Terror,’ producing a book that is as passionate and well-informed as it is intelligent and (for those used only to surface orthodoxies) challenging.”
—Conor Gearty, Director of the Centre for the Study of Human Rights at the London School of Economics

“A necessary contribution to the literature surrounding both humanitarian aid and African geopolitics.”
—Kirkus Reviews