Korea's Place in the Sun: A Modern History (Paperback) 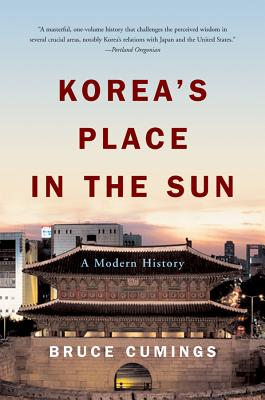 Korea's Place in the Sun: A Modern History (Paperback)

Korea has endured a "fractured, shattered twentieth century," and this updated edition brings Bruce Cumings's leading history of the modern era into the present. The small country, overshadowed in the imperial era, crammed against great powers during the Cold War, and divided and decimated by the Korean War, has recently seen the first real hints of reunification. But positive movements forward are tempered by frustrating steps backward. In the late 1990s South Korea survived its most severe economic crisis since the Korean War, forcing a successful restructuring of its political economy. Suffering through floods, droughts, and a famine that cost the lives of millions of people, North Korea has been labeled part of an "axis of evil" by the George W. Bush administration and has renewed its nuclear threats. On both sides Korea seems poised to continue its fractured existence on into the new century, with potential ramifications for the rest of the world.

Bruce Cumings is chairman of the history department at the University of Chicago and the author of Korea's Place in the Sun. He divides his time between Ann Arbor, Michigan, and Chicago.