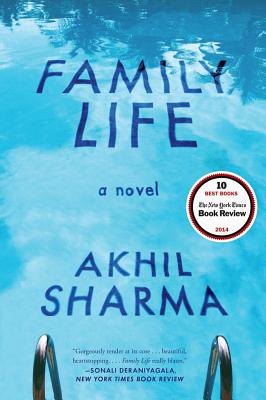 Hailed as a "supreme storyteller" (Philadelphia Inquirer) for his "cunning, dismaying and beautifully conceived" fiction (New York Times), Akhil Sharma is possessed of a narrative voice "as hypnotic as those found in the pages of Dostoyevsky" (The Nation). In his highly anticipated second novel, Family Life, he delivers a story of astonishing intensity and emotional precision.


We meet the Mishra family in Delhi in 1978, where eight-year-old Ajay and his older brother Birju play cricket in the streets, waiting for the day when their plane tickets will arrive and they and their mother can fly across the world and join their father in America. America to the Mishras is, indeed, everything they could have imagined and more: when automatic glass doors open before them, they feel that surely they must have been mistaken for somebody important. Pressing an elevator button and the elevator closing its doors and rising, they have a feeling of power at the fact that the elevator is obeying them. Life is extraordinary until tragedy strikes, leaving one brother severely brain-damaged and the other lost and virtually orphaned in a strange land. Ajay, the family’s younger son, prays to a God he envisions as Superman, longing to find his place amid the ruins of his family’s new life.

Heart-wrenching and darkly funny, Family Life is a universal story of a boy torn between duty and his own survival.

Akhil Sharma is the author of Family Life, a New York Times Best Book of the Year and the winner of the International DUBLIN Literary
Award and the Folio Prize. His writing has appeared in The New Yorker, The Atlantic, Best American Short Stories, and O. Henry Award Stories. A native of Delhi, he lives in New York City and teaches English at Rutgers University–Newark.

Surface simplicity and detachment are the hallmarks of this novel, but hidden within its small, unembellished container are great torrents of pity and grief. Sedulously scaled and crafted, it transforms the chaos of trauma into a glowing work of art.
— The Wall Street Journal

I lost all track of time while I was reading it, and felt by the end that I’d returned from a great and often harrowing journey… To my own surprise, I found myself renewed after reading it, and imbued with a feeling of hope.
— John Wray - Salon

A heartbreaking novel-from-life… [Sharma] takes after Hemingway, as each word of his brilliant novel feels deliberate, and each line is quietly moving.
— Maddie Crum - Huffington Post

There's nothing like the pleasure of being devastated by a short novel. Like Jhumpa Lahiri, Akhil Sharma writes of the Indian immigrant experience with great empathy and a complete lack of sentimentality. Family Life is a dark and thrilling accomplishment by a wildly gifted writer.

Family Life is a terse, devastating account of growing up as a brilliant outsider in American culture. It is a nearly perfect novel.

Sharma is a rare master at charting the frailties and failures, the cruelties and rages, the altering moods and contradictions, whims and perversities of a tragic cast of characters. But this most unsentimental writer leaves the reader, finally and surprisingly, moved.
— Kiran Desai

An immigrant story like no other: funny and dark, unrelenting and above all, true.
— Nell Freudenberger