Zora and Langston: A Story of Friendship and Betrayal (Paperback) 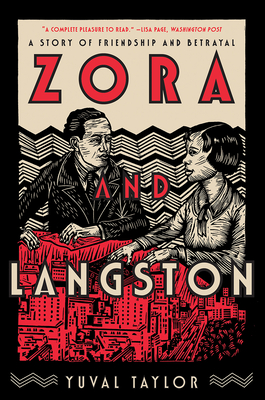 Zora and Langston: A Story of Friendship and Betrayal (Paperback)

Novelist Zora Neale Hurston and poet Langston Hughes, two of America’s greatest writers, first met in New York City in 1925. Drawn to each other, they helped launch a radical journal, Fire!! Later, meeting by accident in Alabama, they became close as they traveled together—Hurston interviewing African Americans for folk stories, Hughes getting his first taste of the deep South. By illuminating their lives, work, competitiveness, and ambitions, Yuval Taylor savvily details how their friendship and literary collaborations dead-ended in acrimonious accusations.

Yuval Taylor is the coauthor of Darkest America: Black Minstrelsy from Slavery to Hip-Hop and Faking It: The Quest for Authenticity in Popular Music. His writing has appeared in the Guardian, the Antioch Review, the Oxford American, and other publications. He lives in Chicago.
A fascinating and lively story of two iconoclastic writers.
— Susan Van Atten - Atlanta Journal-Constitution

Loving yet evenhanded portraits of both figures.… A highly readable account of one of the most compelling and consequential relationships in black literary history.
— Zinzi Clemmons - New York Times Book Review

A dazzling book, easy to read but richly rewarding.
— Arnold Rampersad, author of The Life of Langston Hughes (2 vols.)

An intriguing story about the most confounding and fascinating literary breakup in African American cultural history. Rich in atmosphere and detail, Zora and Langston takes readers deep into the heart of the Harlem Renaissance and the brief but marvelous bond between the leading luminaries of their day.

— Emily Bernard, author of Black Is the Body

Intriguing, funny.… The lives of Hurston and Hughes continue to be fabulous and exciting.
— E. Ethelbert Miller - New York Journal of Books