American Nations: Encounters in Indian Country, 1850 to the Present (Paperback) 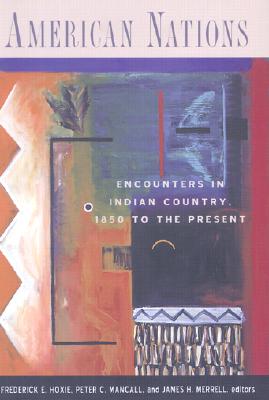 American Nations: Encounters in Indian Country, 1850 to the Present (Paperback)

By Frederick Hoxie (Editor), Peter Mancall (Editor), James Merrell (Editor)
List Price: $64.95
Our Price: $26.50
(Save: $38.45 59%)
On Our Shelves Now
This volume brings together an impressive collection of important works covering nearly every aspect of early Native American history, from contact and exchange to diplomacy, religion, warfare, and disease.
James Merrell is the Lucy Maynard Professor at Vassar College. His books include The Indians' New World, the winner of the Bancroft and Frederick Jackson Turner prizes, and Into the American Woods: Negotiators on theColonial Pennsylvania Frontier. Peter Mancall is Professor of History at the University of Southern California. His book, Deadly Medicine: Indians andAlcohol in Early America was nominated for a Pulitzer Prize in History. Frederick Hoxie is Professor of History at the University of Illinois, Urbana-Champaign. His books include A Final Promise: The Campaign to AssimilateIndians, 1880-1920 and Parading Through History: TheMaking of the Crow Nation in America.