END_OF_DOCUMENT_TOKEN_TO_BE_REPLACED

Existentialism from Dostoevsky to Sartre: Basic Writings of Existentialism by Kaufmann, Kierkegaard, Nietzsche, Jaspers, Heidegger, and Others (Paperback) 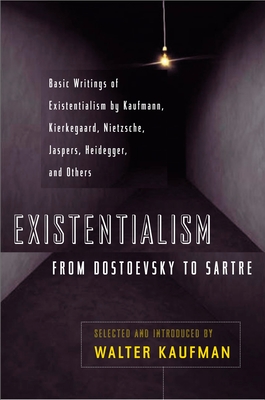 One of the foremost resources on existentialism from renowned philosopher, poet, and Nietzsche translator Walter Kaufmann—a must-read for philosophers, both armchair and professional.

Existentialism from Dostoevsky to Sartre provides basic writings of Dostoevsky, Kierkegaard, Nietzsche, Rilke, Kafka, Ortega, Jaspers, Heidegger, Sartre, and Camus, including some not previously translated, along with an invaluable introductory essay by Walter Kaufmann.

Walter Kaufmann was a philosopher and poet, as well as a renowned translator of Friedrich Nietzsche. His books include Nietzsche: Philosopher, Psychologist, Antichrist, From Shakespeare to Existentialism, and Existentialism: From Dostoevsky to Sartre. He was a Professor of Philosophy at Princeton University, where he taught after receiving his Ph.D. from Harvard in 1947 until his death in 1980. He held visiting appointments at many American and foreign universities, including Columbia, Cornell, Heidelberg, Jerusalem, and the Australian National University; and his books have been translated into Dutch, German, Italian, Japanese, and Spanish.