The Very First Light: The True Inside Story of the Scientific Journey Back to the Dawn of the Universe (Paperback) 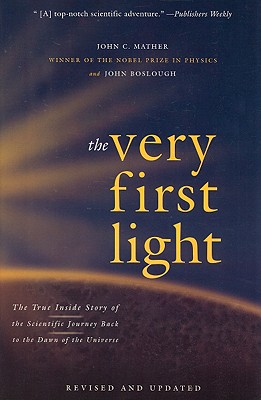 The Very First Light: The True Inside Story of the Scientific Journey Back to the Dawn of the Universe (Paperback)

By John Boslough, John Mather
List Price: $21.99
Our Price: $17.95
(Save: $4.04 18%)
On Our Shelves Now
In the early 1990s, a NASA-led team of scientists changed the way we view the universe. With the COBE (Cosmic Background Explorer) project, they showed that the microwave radiation that fills the universe must have come from the Big Bang -- effectively proving the Big Bang theory beyond any doubt. It was one of the greatest scientific findings of our generation, perhaps of all time. In The Very First Light, John Mather, one of COBE's leaders, and science writer John Boslough tell the story of how it was achieved. A gripping tale of big money, bigger egos, tense politics, and cutting-edge engineering, The Very First Light offers a rare insider's account of the world of big science.
John C. Mather, Ph.D., is a Senior Astrophysicist in the Observational Cosmology Laboratory at NASA's Goddard Space Flight Center. He won the Nobel Prize in 2006. He is a member of the Astrophysics Subcommittee of the NASA Advisory Committee and of the Standing Review Board for the Kepler project. He lives in Maryland.

John Boslough received honors in the history of science from Princeton University and has written widely on science for National Geographic and other publications. His previous books include Stephen Hawking's Universe and Masters of Time, co-authored by Wendy W. Cortesi. He lives in Princeton, New Jersey.