END_OF_DOCUMENT_TOKEN_TO_BE_REPLACED

Stand by Me: The Forgotten History of Gay Liberation (Hardcover) 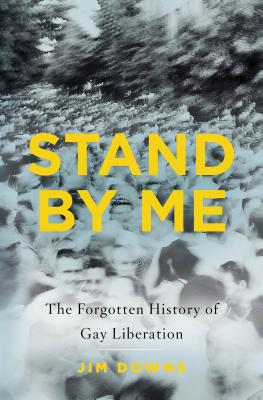 From a prominent young historian, the untold story of the rich variety of gay life in America in the 1970s

Despite the tremendous gains of the LGBT movement in recent years, the history of gay life in this country remains poorly understood. According to conventional wisdom, gay liberation started with the Stonewall Riots in Greenwich Village in 1969. The 1970s represented a moment of triumph -- both political and sexual -- before the AIDS crisis in the subsequent decade, which, in the view of many, exposed the problems inherent in the so-called "gay lifestyle".

In Stand by Me, the acclaimed historian Jim Downs rewrites the history of gay life in the 1970s, arguing that the decade was about much more than sex and marching in the streets. Drawing on a vast trove of untapped records at LGBT community centers in Los Angeles, New York, and Philadelphia, Downs tells moving, revelatory stories of gay people who stood together -- as friends, fellow believers, and colleagues -- to create a sense of community among people who felt alienated from mainstream American life.

As Downs shows, gay people found one another in the Metropolitan Community Church, a nationwide gay religious group; in the pages of the Body Politic, a newspaper that encouraged its readers to think of their sexuality as a political identity; at the Oscar Wilde Memorial Bookstore, the hub of gay literary life in New York City; and at theaters putting on "Gay American History," a play that brought to the surface the enduring problem of gay oppression.

These and many other achievements would be largely forgotten after the arrival in the early 1980s of HIV/AIDS, which allowed critics to claim that sex was the defining feature of gay liberation. This reductive narrative set back the cause of gay rights and has shaped the identities of gay people for decades.

An essential act of historical recovery, Stand by Me shines a bright light on a triumphant moment, and will transform how we think about gay life in America from the 1970s into the present day.

Jim Downs, is a Mellon New Directions Fellow at Harvard University and an associate professor of history at Connecticut College. The author of the critically acclaimed Sick from Freedom: African-American Illness and Suffering during the Civil War and Reconstruction, he has also written for Time, the Huffington Post, and the New York Times, among other publications. Downs lives in Cambridge, MA.

"Downs has an instinct for historically relevant stories and he tells them well.... In the chapter 'Prison Sounds,' Downs offers similarly invigorating detective work, digging up aspects of LGBT activism that have eluded most historians."—Boston Review

"Downs capably blends authority and warmth in this thoughtful reexamination of an era."—Boston Globe

"The sheer act of Downs' acknowledging that not all gay men subscribed to the popular 'three Big Bs' of the time--'the Bars, Beaches, and Baths'--and found their identity validated and articulated through the communal practices of Christian worship and cultural hubs (like the Oscar Wilde Memorial Bookshop) is a refreshing and invigorating experience. Stand By Me proves a deeply moving read, one that passionately and urgently argues for us to acknowledge some of the forgotten history of gay liberation."—San Francisco Chronicle

"Downs infuses great passion and intent in every paragraph, striving to the raise the level of discourse even as he's tossing outmoded ideas aside left and right. This is history as it should be told, as complex and as personal as possible."—Manhattan Book Review

"Stand by Me includes massacre and tragedy; its opening chapter is an emotional rehashing of the 1973 arson attack--the most lethal targeting of gay people in American history until the June 12 massacre at Orlando's Pulse club--took the lives of 32 men during a religious service.... The passages that grab you most...address the 'usable past,' which Downs defines as the facets of history that provide gay people with 'legitimacy, meaning, and, most of all, a genealogy to their plight.' And his passion is infectious."—Public Books

"Stand By Me is not duplicative of other accounts. It is to our movement an equivalent to Howard Zinn's A People's History of the United States."—Lambda Literary

"Stand By Me is a laudable, thoroughly researched corrective to the prevalent idea of gay people in the 1970s as uninvolved, unengaged sex-crazed hedonists."—A & U Magazine

"Downs makes a good case for us to remember that the zeal for liberation in the '70s was deeply and directly informed by feminist politics, and thus was only ever in part, primarily or even strongly, about sexual liberation.... [A] diverting book with considerable virtues."—Gay & Lesbian Review

"This book is informative, sometimes horrifying, interesting and, unlike your old high school history books, it's never dry."—Washington Blade

"A valuable addition to LGBT and social-change collections."—Booklist

"In sparking, often moving, prose, Jim Downs rewrites the history of the gay liberation movement in the 1970s. This is an important contribution not only to the history of that struggle but to our understanding of the afterlife of the upheavals of the 1960s."—Eric Foner, Pulitzer Prize-winning author of The Fiery Trial

"From the ashes of a horrific fire that engulfed a gay church in New Orleans in 1973, Jim Downs has rescued the history of gay men in the decade after the Stonewall uprising. As this beautiful, and at times haunting, book makes clear, gay men in this period forged intellectually vibrant, spiritually rich, and nourishing communities that not only sustained them through some harrowing and heartwarming times, but that also grew more powerful as the twentieth century became the twenty-first."—Heather Ann Thompson, University of Michigan

"Stand by Me brings the 1970s back to life, not as it is imagined to be, but as it actually was. In compelling prose, Jim Downs has recovered the stories of heroic individuals who risked much to come out, to build community, and to fight for social justice. Some of these episodes are tragic and some inspiring. All of them deserve to be remembered."—John D'Emilio, author of Intimate Matters