This Nonviolent Stuff'll Get You Killed: How Guns Made the Civil Rights Movement Possible (Hardcover) 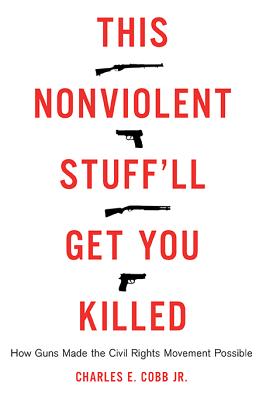 This Nonviolent Stuff'll Get You Killed: How Guns Made the Civil Rights Movement Possible (Hardcover)


On Our Shelves Now
Visiting Martin Luther King Jr. at the peak of the Montgomery, Alabama bus boycott, journalist William Worthy almost sat on a loaded pistol. "Just for self defense," King assured him. It was not the only weapon King kept for such a purpose; one of his advisors remembered the reverend's Montgomery, Alabama home as "an arsenal." Like King, many ostensibly "nonviolent" civil rights activists embraced their constitutional right to selfprotection--yet this crucial dimension of the Afro-American freedom struggle has been long ignored by history. In This Nonviolent Stuff'll Get You Killed, civil rights scholar Charles E. Cobb Jr. describes the vital role that armed self-defense played in the survival and liberation of black communities in America during the Southern Freedom Movement of the 1960s. In the Deep South, blacks often safeguarded themselves and their loved ones from white supremacist violence by bearing--and, when necessary, using--firearms. In much the same way, Cobb shows, nonviolent civil rights workers received critical support from black gun owners in the regions where they worked. Whether patrolling their neighborhoods, garrisoning their homes, or firing back at attackers, these courageous men and women and the weapons they carried were crucial to the movement's success. Giving voice to the World War II veterans, rural activists, volunteer security guards, and self-defense groups who took up arms to defend their lives and liberties, This Nonviolent Stuff'll Get You Killed lays bare the paradoxical relationship between the nonviolent civil rights struggle and the Second Amendment. Drawing on his firsthand experiences in the civil rights movement and interviews with fellow participants, Cobb provides a controversial examination of the crucial place of firearms in the fight for American freedom.
Charles E. Cobb, Jr. is a former National Geographic magazine staff writer and a former field secretary for the Student Nonviolent Coordinating Committee, and has also served as a Visiting Professor in Brown University's Department of Africana Studies. A veteran journalist, he is an inductee of the National Association of Black Journalists Hall of Fame, and his reporting has won multiple awards. Cobb lives in Jacksonville, Florida.