No Friends but the Mountains: Dispatches from the World's Violent Highlands (Hardcover) 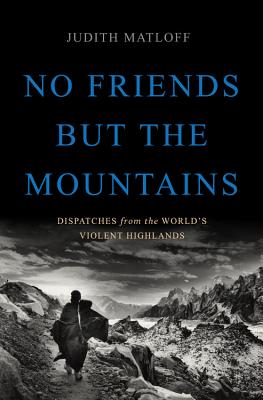 No Friends but the Mountains: Dispatches from the World's Violent Highlands (Hardcover)

Mountainous regions are home to only ten percent of the world's population yet host a strikingly disproportionate share of the world's conflicts. Mountains provide a natural refuge for those who want to elude authority, and their remoteness has allowed archaic practices to persist well into our globalized era.

As Judith Matloff shows, the result is a combustible mix we in the lowlands cannot afford to ignore. Traveling to conflict zones across the world, she introduces us to Albanian teenagers involved in ancient blood feuds; Mexican peasants hunting down violent poppy growers; and Jihadists who have resisted the Russian military for decades. At every stop, Matloff reminds us that the drugs, terrorism, and instability cascading down the mountainside affect us all.

A work of political travel writing in the vein of Ryszard Kapuscinski and Robert Kaplan, No Friends but the Mountains is an indelible portrait of the conflicts that have unexpectedly shaped our world.
Judith Matloff teaches conflict reporting at the Columbia Graduate School of Journalism. Her articles have appeared in numerous publications including the New York Times Magazine, Economist, and Christian Science Monitor. Matloff lives in New York City.
"No Friends but the Mountains is Matloff's globe-hopping, more-often-than-not crushing investigation into mountain mayhem. She has the experienced intrepidity to go get the story behind these murderous frays without coming across as a flake with a death wish."—Christian Science Monitor

"No Friends but the Mountains travels straight to the heart of eight mountainous regions as distinctive as their surrounding terrain... Matloff's lively writing keeps the dense subject matter from getting bogged down, and her accounts of perilous trips into hot zones are akin to an adventure novel... an essential work on the fundamentals of high-altitude warfare."—Shelf Awareness

"[A] chillingly enlightening account of those who live in mountain regions in order to elude or destroy authority, and whose blood feuds are handed down from one generation to the next."—Geographical (UK)

"This trip to some very different corners of the globe is recounted in clear, visceral language... Matloff's investigation is a worthy read for foreign affairs and anthropology buffs alike, and her conclusion provides insight into current global affairs."—Publishers Weekly, starred review

"Impressive and necessary... Matloff approaches her topic with a magic combination of wisdom and empathy, and it is impossible to not be moved."—Booklist, starred review

"Through thoughtful vignettes, [Matloff] weaves personal narratives alongside relevant historical and present-day circumstances to relate regional stories that consistently refer to and affirm the global tale she seeks to tell."—Library Journal

"Americans discount geography precisely because they have been the beneficiaries of it. People elsewhere know better. Judith Matloff's book is an indefatigable journalistic exploration of how mountains shape, sustain, and even determine war and culture around the world. Her argument, which her reporting makes undeniable, is at once obvious and original."—Robert D. Kaplan, author of The Revenge of Geography

"In No Friends But the Mountains, Judith Matloff has delivered a vital, deeply revealing book of political travelogue and intrepid correspondence. She is the ideal witness--learned, dogged, skeptical, but always listening out for new and credible voices. This is classical international journalism of the highest order."—Steve Coll, Dean of Columbia Journalism School and staff writer for The New Yorker

"Judith Matloff's book is a political geography of mountains, once the haunt of witches, now-in many parts of the world-strongholds of outlaws and rebels, told with a sense of drama by someone who has clearly done her fieldwork."—Yi-Fu Tuan, author of Romantic Geography

"The most spectacular heights on earth hold mysteries, not least why conflict so often shadows their vistas. Judith Matloff-a brave, engaging, keenly observant guide-rides shuddering buses, boards decrepit helicopters, and hikes through mud and checkpoints in pursuit of answers and solutions. Along the way, as history and present-day circumstances intertwine, Matloff reveals the rich, surprising and perplexing life of places too often diminished by the flat imagery of war."—Sheri Fink, Pulitzer Prize-winning journalist and author of Five Days at Memorial and War Hospital

"Vistas, vainglory, vengeance and violence mark Judith Matloff's engaging voyage across mountainous terrains. She reports with empathy on religious charities, anthropologists, guerrillas, and state armies all attempting to pacify some of the world's least governed spaces."—David D. Laitin, professor of political science at Stanford University and author of Nations, States and Violence