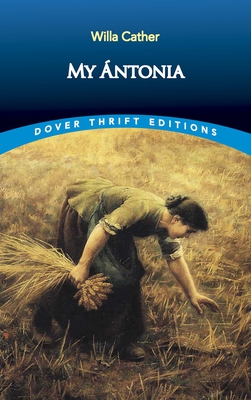 My ntonia evokes the Nebraska prairie life of Willa Cather's childhood, and commemorates the spirit and courage of immigrant pioneers in America. One of Cather's earliest novels, written in 1918, it is the story of ntonia Shimerda, who arrives on the Nebraska frontier as part of a family of Bohemian emigrants. Her story is told through the eyes of Jim Burden, a neighbor who will befriend ntonia, teach her English, and follow the remarkable story of her life.
Working in the fields of waving grass and tall corn that dot the Great Plains, ntonia forges the durable spirit that will carry her through the challenges she faces when she moves to the city. But only when she returns to the prairie does she recover her strength and regain a sense of purpose in life. In the quiet, probing depth of Willa Cather's art, ntonia's story becomes a mobbing elegy to those whose persistence and strength helped build the American frontier.

Pulitzer Prize-winning author Willa Cather (1873-1947) spent her formative years in Nebraska, which was at that time frontier territory. Her exposure to the region's dramatic environment and intrinsic hardships -- along with its diverse population of European-Americans, Native Americans, and immigrants -- shaped and informed much of her fiction.