The Subjection of Women (Paperback) 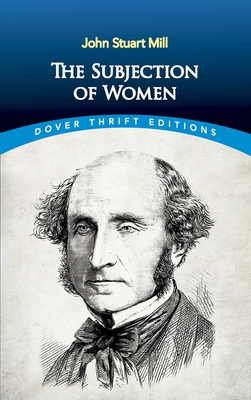 The Subjection of Women (Paperback)

By John Stuart Mill
List Price: $4.00
Our Price: $3.50
(Save: $0.50 13%)
On Our Shelves Now
Written in 1861 and published eight years later, this influential essay by the great English philosopher and economist is still relevant and its arguments significant. Believing that the subjugation of women was primarily political and psychological in origin, Mill urged the establishment of complete equality in all legal, political, social, and domestic relations between men and women.
Arguing for both legal reforms and a social revolution, he focuses on women's exclusion from the political process, their lack of any rights in marriage, and the benefits to be obtained by their liberation. Moreover, if they are to share the freedoms enjoyed by men, equal opportunities for employment and education for women are also necessary.
For its time, the work was radical and far-reaching in its demands; but despite its repeated emphasis on forms of oppression and recognition of the difficulties endured by women, it is essentially an optimistic work maintaining a firm belief that increased equality and liberty for women were inevitable.
Carefully researched and clearly expressed with great logic and consistency, the book remains a landmark in the struggle for human rights. In this inexpensive edition, it will certainly be welcomed by feminists but will also appeal to anyone interested in the philosophical, human, and social issues underlying the idea of freedom and equality for all people, regardless of gender.