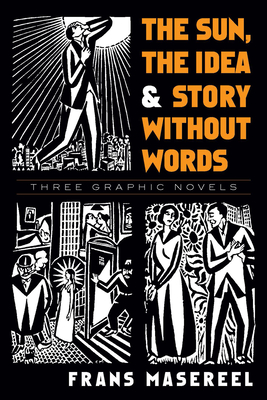 By Frans Masereel, David A. Beronä (Introduction by)


On Our Shelves Now
Rich in symbolism, these compelling graphic novels feature more than 200 starkly beautiful woodcut illustrations. The passionate, dynamic narratives include The Sun, a somber exploration of one man's struggle with destiny; The Idea, a depiction of the triumph of an artistic concept over attempts at its suppression; and Story Without Words, a tale of thwarted romance.
Belgian-born Frans Masereel illustrated the works of Tolstoy, Zola, and Oscar Wilde, but he made the greatest impact with his wordless novels. These three stories, dating from the early 1920s, reflect the German Expressionist revival of the art of the woodcut. Precursors to today's graphic novels, they also represent a centuries-old tradition of picture books for unschooled audiences. Masereel combines allegory and satire in his explorations of love, alienation, and artistic creation. Thomas Mann praised these striking Expressionistic images as so compelling, so deeply felt, so rich in ideas, that one never tires of looking at them.
Frans Masereel was an acclaimed Belgian painter and one of the most recognized woodcut artists of the 20th century. He illustrated the works of such literary greats as Oscar Wilde, Emile Zola, and Leo Tolstoy, but his wordless graphic novels are considered to be his greatest legacy.