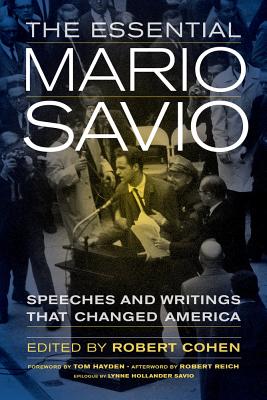 
On Our Shelves Now
The Free Speech Movement in Berkeley, California, was pivotal in shaping 1960s America. Led by Mario Savio and other young veterans of the civil rights movement, student activists organized what was to that point the most tumultuous student rebellion in American history. Mass sit-ins, a nonviolent blockade around a police car, occupations of the campus administration building, and a student strike united thousands of students to champion the right of students to free speech and unrestricted political advocacy on campus.

This compendium of influential speeches and previously unknown writings offers insight into and perspective on the disruptive yet nonviolent civil disobedience tactics used by Savio. The Essential Mario Savio is the perfect introduction to an American icon and to one of the most important social movements of the post-war period in the United States.
Robert Cohen is Professor of History and Social Studies in New York University’s Steinhardt School of Culture, Education, and Human Development. He is an affiliated member of NYU’s History Department. His books include Freedom’s Orator: Mario Savio and the Radical Legacy of the 1960s, The Free Speech Movement: Reflections on Berkeley in the 1960s (coedited with Reginald E. Zelnik), and Rebellion in Black and White: Southern Student Activism in the 1960s (coedited with David S. Snyder).

Tom Hayden is an American social and political activist, author, and politician. He was a founder of Students for a Democratic Society; the primary author of the SDS’s manifesto, the Port Huron Statement; and a member of the California State Legislature for eighteen years. He is director of the Peace and Justice Resource Center in Culver City, California.

Robert Reich was the U.S. Secretary of Labor in the Clinton adminstration. He is Chancellor’s Professor of Public Policy at the University of California, Berkeley.

Lynne Hollander Savio is a Free Speech Movement veteran who coauthored the Rossman Report. She is the widow of Mario Savio and heads the board of directors of the Mario Savio Memorial Lecture and Young Activist Award.