Gaza: An Inquest into Its Martyrdom (Hardcover) 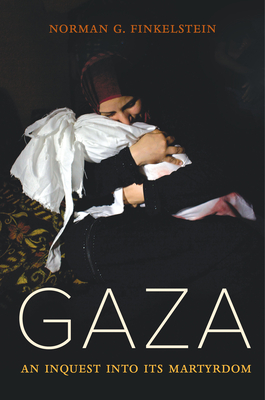 Gaza: An Inquest into Its Martyrdom (Hardcover)

"No one who ventures an opinion on Gaza . . . is entitled to do so without taking into account the evidence in this book."
—The Intercept

The Gaza Strip is among the most densely populated places in the world. More than two-thirds of its inhabitants are refugees, and more than half are under eighteen years of age. Since 2004, Israel has launched eight devastating “operations” against Gaza’s largely defenseless population. Thousands have perished, and tens of thousands have been left homeless. In the meantime, Israel has subjected Gaza to a merciless illegal blockade.

What has befallen Gaza is a man-made humanitarian disaster.

Based on scores of human rights reports, Norman G. Finkelstein's new book presents a meticulously researched inquest into Gaza’s martyrdom. He shows that although Israel has justified its assaults in the name of self-defense, in fact these actions constituted flagrant violations of international law.

But Finkelstein also documents that the guardians of international law—from Amnesty International and Human Rights Watch to the UN Human Rights Council—ultimately failed Gaza. One of his most disturbing conclusions is that, after Judge Richard Goldstone's humiliating retraction of his UN report, human rights organizations succumbed to the Israeli juggernaut.

Finkelstein’s magnum opus is both a monument to Gaza’s martyrs and an act of resistance against the forgetfulness of history.
Norman G. Finkelstein received his doctorate from the Princeton University Department of Politics. His many books have been translated into some fifty foreign editions. He is a frequent lecturer and commentator on the Israel-Palestine conflict.
"In its comprehensive sweep, deep probing and acute critical analysis, Finkelstein’s study stands alone.”
— Noam Chomsky

"Readers with fixed positions, either in agreement or disagreement with Finkelstein, will find much to engage with here."
— Publishers Weekly

"No one who ventures an opinion on Gaza . . . is entitled to do so without taking into account the evidence in this book. For that, at least, the people of Gaza owe a debt to Norman Finkelstein. . . . Offers what may well be the definitive history of one of the most horrifying and sustained campaigns of collective punishment in modern world history.""
— The Intercept

"Norman Finkelstein has the moral gravity of an Old Testament prophet, the scrupulous attention to detail of a Talmudic scholar, and the mordant sense of humor of a Yiddish novelist. All these attributes are on display in Gaza: An Inquest Into its Martyrdom. . . . The cumulative impact of Finkelstein’s meticulously-documented 408-page chronicle is devastating, and it will leave the reader stunned that the worldwide reaction is so muted."
— Mondoweiss

“Recommended . . . for a review of the evidence of Israel’s wrongdoing that is buried or downplayed.”
— Current Affairs

“Gaza is a tour de force. Finkelstein unravels the facade that Israel and its allies aim to create, exposing the double standards of the US government, the UN and even human rights organisations."
— Neve Gordon,

"Finkelstein’s book is a stark reminder of the facets which have incarcerated Gaza to an extent that its political voice has been rendered irrelevant by the international community. The unravelling of misrepresentation and collaboration to ensure Israel’s impunity at an international level are brought together as referenced, detailed facts. Finkelstein’s demolition of colonial and international propaganda vindicates his objective 'to refute that Big Lie by exposing each of the little lies."
— Middle East Monitor

"The factual record compiled here will be of interest to future historians on all sides."
— CHOICE

“One would be hard pressed to find such crucial analysis in the US press, or the wider western media for that matter. . . . For both seasoned and newer readers of the conflict, Gaza is a must read; a serious commitment to revealing hard truths in their rawest form.”
— New Arab

"Anyone who chooses to read Gaza: An Inquest into its Martyrdom bears witness to the harrowing Truth and preserves it in the collective memory."
— Palestine Chronicle

"A meticulous 440-page study of international law, of Israel’s sustained attacks against Gaza and its people and offers what may well be the definitive history of one of the most horrifying and sustained campaigns of collective punishment in modern world history."
— The Intercept

"His research and his precise inquest into Israel’s wars on Gaza raises many questions about not only the vicious right-wing nature of successive Israeligovernments, but also the failure of international law, the human rights industry and the UN to be anything other than bystanders . . . Finkelstein’s systematic and analytical exposé is a necessary read."
— Socialist Lawyer

"Gaza: An Inquest into Its Martyrdom is a powerful call to intensify our campaign to bring about justice for the Palestinian people which has been denied them for so long . . . It is a work of exacting anf thorough scholarship, encyclopaedic in its coverage of the detal of the terrible treatment of the Palestinians of Gaza, and stands both as a reference guide to the suject and an appeal for justice."
— Spokesman: Journal of the Bertrand Russell Peace Foundation