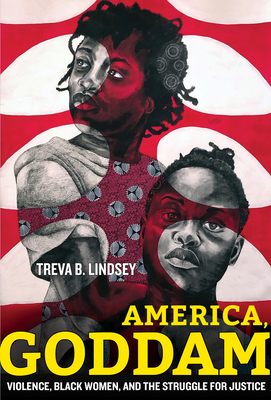 By Treva B. Lindsey


On Our Shelves Now
One of the Best Nonfiction Books of 2022, Kirkus Reviews
"A righteous indictment of racism and misogyny."—Publishers Weekly

A powerful account of violence against Black women and girls in the United States and their fight for liberation.

Echoing the energy of Nina Simone's searing protest song that inspired the title, this book is a call to action in our collective journey toward just futures.

America, Goddam explores the combined force of anti-Blackness, misogyny, patriarchy, and capitalism in the lives of Black women and girls in the United States today.

Through personal accounts and hard-hitting analysis, Black feminist historian Treva B. Lindsey starkly assesses the forms and legacies of violence against Black women and girls, as well as their demands for justice for themselves and their communities. Combining history, theory, and memoir, America, Goddam renders visible the gender dynamics of anti-Black violence. Black women and girls occupy a unique status of vulnerability to harm and death, while the circumstances and traumas of this violence go underreported and understudied. America, Goddam allows readers to understand

America, Goddam powerfully demonstrates that the struggle for justice begins with reckoning with the pervasiveness of violence against Black women and girls in the United States.
Treva B. Lindsey is Associate Professor in the Women's, Gender, and Sexuality Studies Department at Ohio State University and founder of the Transformative Black Feminism(s) Initiative in Columbus, Ohio.
"A searing investigation of the violent oppression experienced by Black women and girls in America. . . . Required reading for all Americans."
— Kirkus Reviews

"In this fiery debut, Lindsey . . . decries historical and contemporary injustices against Black women in America. Interweaving her own harrowing experiences with astute cultural and political analysis, Lindsey sheds light on how police mistreatment, medical racism, poverty, intracommunal violence, and other social ills place Black women in a condition of 'unlivable living.'. . . Carefully researched and sharply argued, this is a righteous indictment of racism and misogyny."
— Publishers Weekly

"This book quickly creates space for the reader to ponder and grow without feeling ashamed of their starting point in the discussion. . . . The debate and exchange between the reader and the author does not call for a change in beliefs, unless desired by the reader, but a realization of the alternative harsh reality that exists for Black girls and women."
— Ethnic and Racial Studies