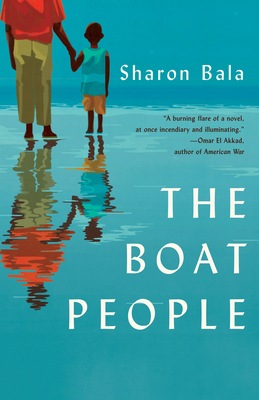 
On Our Shelves Now
Globe and Mail bestseller, The Boat People is an extraordinary novel about a group of refugees who survive a perilous ocean voyage only to face the threat of deportation amid accusations of terrorism

When a rusty cargo ship carrying Mahindan and five hundred fellow refugees from Sri Lanka's bloody civil war reaches Vancouver's shores, the young father thinks he and his six-year-old son can finally start a new life. Instead, the group is thrown into a detention processing center, with government officials and news headlines speculating that among the "boat people" are members of a separatist militant organization responsible for countless suicide attacks—and that these terrorists now pose a threat to Canada's national security. As the refugees become subject to heavy interrogation, Mahindan begins to fear that a desperate act taken in Sri Lanka to fund their escape may now jeopardize his and his son's chance for asylum.
Told through the alternating perspectives of Mahindan; his lawyer, Priya, a second-generation Sri Lankan Canadian who reluctantly represents the refugees; and Grace, a third-generation Japanese Canadian adjudicator who must decide Mahindan's fate as evidence mounts against him, The Boat People is a spellbinding and timely novel that provokes a deeply compassionate lens through which to view the current refugee crisis.
Sharon Bala lives in St. John’s where she is a member of The Port Authority writing group. Her short story “Butter Tea at Starbucks” won the prestigious Writers’ Trust / McClelland & Stewart Journey Prize in 2017.  The Boat People is her first novel. Please visit SharonBala.com.
"The Boat People is a burning flare of a novel, at once incendiary and illuminating. With a rare combination of precision, empathy and insight, Sharon Bala has crafted an unflinching examination of what happens when the fundamental human need for safety collides with the cold calculus of bureaucracy. In the best tradition of fearless literature, it shatters our comfortable illusions about who we really are and reveals just how asymmetrical the privilege of belonging can be. This is a brilliant debut – a story that needs to be told, told beautifully.”
—Omar El Akkad, author of American War

"Timely and engrossing...This is a powerful debut."
—Publishers Weekly

"Rooted in actual events, Bala uses the tools of fiction to excavate the human truths hidden under the headlines...The Boat People is a book perfect for our times, essential reading to bring context to questions which we are, perhaps, more inclined to ignore."
—Toronto Star

“This earnest debut novel forcefully explores the issues surrounding immigration…deeply moving and nuanced, The Boat People asks what price a country is willing to pay when public safety comes at the cost of human lives.”
—Booklist

"A multifaceted debut novel...Cinematic details transport us to a tension-rich drama...Bala moves fluidly from past to present, mixing memories with current crises...Such juxtapositions build and maintain suspense all the way to the last line, where readers are left hanging, as if justice is in our hands."
—BookPage

“A deeply honest story that speaks from the soul of the refugee. Sharon Bala paints a picture of love, strength and struggle so vividly and so powerfully with her words, that it has the ability to be a catalyst for a deeper conversation and change about issues surrounding immigration today…Bravo to Bala on a phenomenal début that gives life to every one of us who wants people to have the opportunity for a better life.”
—Fredericksburg Freelance-Star