Raised From The Ground (Paperback) 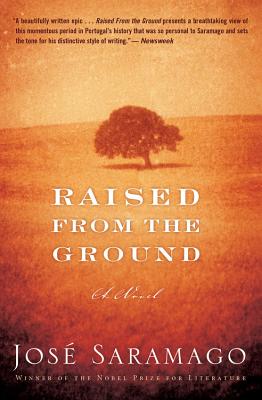 Raised From The Ground (Paperback)

“Published in Portugal in 1980 and just now appearing in English, Saramago's third novel was worth the wait. A pivotal book in the late Nobel laureate's development, this tale marks the debut of Saramago's inimitable literary voice: digressive, ironic, humorous, and graceful, but impatient with 'lyrical tosh,' it features a narrator who speaks as 'we' and embraces all of humanity in a drama of good versus evil. Scathing about the abuse of the poor by the rich and powerful, Saramago's story is nonetheless written from a deep faith in the pure-heartedness and resilience of the human spirit, showing how even the most down-trodden will eventually rise up.”
— Laurie Greer, Politics & Prose Books and Coffee Shop, Washington, DC

"Essential...A novel that resounds with relevance for our own time." —New York Times Book ReviewFirst published in 1980, the City of Lisbon Prize–winning Raised from the Ground follows the changing fortunes of the Mau Tempo family—poor landless peasants not unlike Saramago’s own grandparents. Set in Alentejo, a southern province of Portugal known for its vast agricultural estates, the novel charts the lives of the Mau Tempos as national and international events rumble on in the background—the coming of the republic in Portugual, the two world wars, and an attempt on the dictator Salazar’s life. Yet nothing really impinges on the grim reality of the farm laborers’ lives until the first communist stirrings.

Raised from the Ground is Saramago’s most deeply personal novel, the book in which he found the signature style and voice that distinguishes all of his brilliant works.

JOSÉ SARAMAGO (1922–2010) was the author of many novels, among them Blindness, All the Names, Baltasar and Blimunda, and The Year of the Death of Ricardo Reis. In 1998 he was awarded the Nobel Prize for Literature.

"Offers insights into the renowned author and his native land."-Kirkus "Saramago's poetic and political fans of the English-speaking world will unite in appreciation for this long-awaited translation."-Booklist —