They Called Themselves the K.k.k.: The Birth of an American Terrorist Group (Paperback) 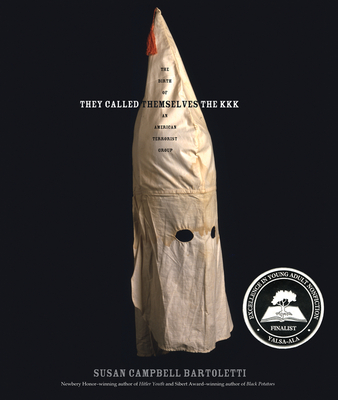 They Called Themselves the K.k.k.: The Birth of an American Terrorist Group (Paperback)


On Our Shelves Now
Boys, let us get up a club.With those words, six restless young men raided the linens at a friend’s mansion, pulled pillowcases over their heads, hopped on horses, and cavorted through the streets of Pulaski, Tennessee in 1866. The six friends named their club the Ku Klux Klan, and, all too quickly, their club grew into the self-proclaimed Invisible Empire with secret dens spread across the South.This is the story of how a secret terrorist group took root in America’s democracy. Filled with chilling and vivid personal accounts unearthed from oral histories, congressional documents, and diaries, this account from Newbery Honor-winning author Susan Campbell Bartoletti is a book to read and remember. A YALSA Award for Excellence in Nonfiction for Young Adults Finalist.

Susan Campbell Bartoletti is the award-winning author of several books for young readers, including Black Potatoes: The Story of the Great Irish Famine, 1845–1850, winner of the Robert F. Sibert Medal. She lives in Moscow, Pennsylvania.

* "Balancing the stories of the Klan and the former slaves' determination to remake their lives, Bartoletti makes extensive use of congressional testimony, interviews, journals, diaries and slave narratives to allow the players to speak in their own voices as much as possible...An exemplar of history writing and a must for libraries and classrooms."—Kirkus Reviews, starred review   * "Bartoletti follows multi-award-winning titles such as Hitler Youth (2005) with another standout contribution to youth history shelves...It's the numerous first-person quotes, though, that give the book its beating heart, and her searing, expertly selected stories of people on all sides of the violent conflicts will give readers a larger understanding of the conditions that incubated the Klan's terrorism; how profoundly the freed people and their sympathizers suffered; and how the legacy of that fear, racism, and brutality runs through our own time."—Booklist, starred review   * "Copious photos, engravings, and illustrations provide a hard-hitting graphic component to this illuminating book. And while Bartoletti notes that contemporary 'hate groups wield none of the power or prestige that the Ku Klux Klan held in earlier years,' her account of attending a Klan meeting while researching the book is chilling to the core." —Publishers Weekly, starred review   * "As in Hitler Youth, Bartoletti tackles a tough, grim subject with firmness and sensitivity...Period illustrations throughout make seeing believing, and the appended civil rights timeline, bibliography, and source notes are an education in themselves. Exemplary in scholarship, interpretation, and presentation."—The Horn Book, starred review   * "Bartoletti effectively targets teens with her engaging and informative account that presents a well-structured inside look at the KKK, societal forces that spawn hate/terrorist groups, and the research process."—School Library Journal, starred review —