Temple Grandin: How the Girl Who Loved Cows Embraced Autism and Changed the World (Paperback) 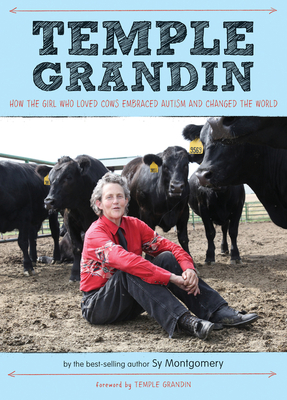 Temple Grandin: How the Girl Who Loved Cows Embraced Autism and Changed the World (Paperback)

When Temple Grandin was born, her parents knew she was different. Years later she was diagnosed with autism. Temple’s doctor recommended institutionalizing her, but her mother believed in her. Temple went to school instead. Today, Dr. Temple Grandin, a scientist and professor of animal science at Colorado State University, is an autism advocate and her world-changing career revolutionized the livestock industry. This compelling biography and Temple's personal photos take us inside her extraordinary mind and open the door to a broader understanding of autism.

In addition to researching films, articles, and over twenty books, National Book Award finalist Sy Montgomery has been honored with a Sibert Medal, two Science Book and Film Prizes from the National Association for the Advancement of Science, three honorary degrees, and many other awards. She lives in Hancock, New Hampshire, with her husband, Howard Mansfield, and their border collie, Thurber.
Website: symontgomery.com
Twitter: @SyTheAuthor.

TEMPLE GRANDIN is one of the world’s most accomplished and well-known adults with autism. She is a professor at Colorado State University and the New York Times bestselling author of several books, including The Autistic Brain, which have sold more than a million copies. Named one of Time's most influential people in 2010, the HBO movie based on her life, starring Claire Danes, received seven Emmy Awards.

-NYPL 100 Titles for Reading & Sharing, 2012 "A well written, admiring and thought-provoking portrait."--Kirkus   "Montgomery's book not only tells the powerful story of one amazing woman's life journey, but also has potential to help readers understand autistic people and animals."--Horn Book   "It isn't easy to describe how the mind of someone with autism works, but Montgomery's biography effectively breaks the disorder down for a younger audience while introducing the extraordinary life of activist Temple Grandin."--Booklist   "Lively, well-worded narrative...For librarians who struggle to find well-written biographies of women, this is a must-buy."--School Library Journal, starred review —