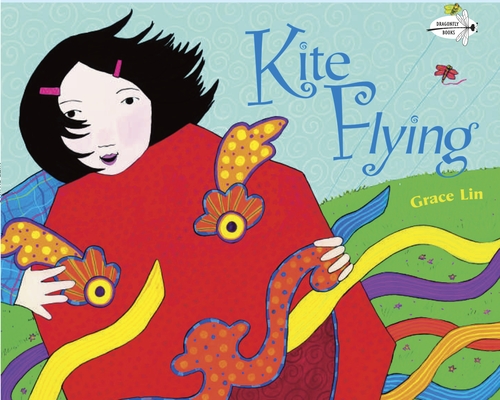 The wind is blowing. It is a good day for kites! The whole family makes a trip to the local craft store for paper, glue, and paint. Everyone has a job: Ma-Ma joins sticks together. Ba-Ba glues paper. Mei-Mei cuts whiskers while Jie-Jie paints a laughing mouth. Dragon eyes are added and then everyone attaches the final touch . . . a noisemaker! Now their dragon kite is ready to fly.

Kite Flying celebrates the Chinese tradition of kite making and kite flying and lovingly depicts a family bonded by this ancient and modern pleasure.
Grace Lin is an award-winning and bestselling author and illustrator. She has written and illustrated several picture books about life in a Chinese American family (based on her own!): Dim Sum for Everyone!, Kite Flying, Fortune Cookie Fortunes, and Thanking the Moon. And she was awarded a Caldecott Honor for A Big Mooncake for Little Star. Her books for older readers include the Newbery Honor winner Where the Mountain Meets the Moon, When the Sea Turned to Silver, Starry River of the Sky, The Year of the Dog, The Year of the Rat, and Ling & Ting: Not Exactly the Same!. Grace Lin grew up in upstate New York and attended the Rhode Island School of Design. She now lives in Massachusetts. To learn more, visit gracelin.com.
“A delightful read-aloud.”–Kirkus Reviews, Starred

“Lin’s paintings are graphically striking . . . a delight of patterning.”–Booklist, Starred