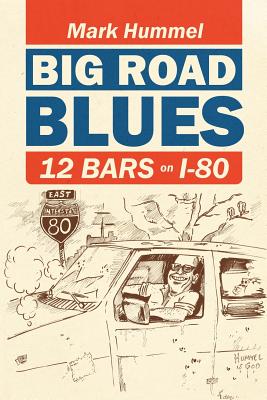 
On Our Shelves Now
BIG ROAD BLUES:12 BARS ON I-80 is the often irreverent blues memoir by, blues harmonica man Mark Hummel. Fact and fiction combine in this memoir in a variety of hilarious to frustrating incidents taken from twenty six years on the blues highway. Big Road Blues tells the story of a blues musician's life and trials, driving to and entertaining in clubs with his band, as they travel around the USA and the world. Mick Jagger and Sting lead the glamorous life on the road but not so with Hummel and his traveling troubadours of Blues Survivors. Working their way across the country from one blues venue to the next, in a van packed with the band, instruments, and product, in all degrees of violent weather, and managing a band of often radically troubled musicians in the process Yet somehow, our harmonica virtuoso and promoter Mark Hummel, manages to play extended tours back and forth across the USA, Canada and overseas on a full time basis. Hummel has been playing over two hundred gigs a year for three decades Big Road Blues:12 Bars ON I-80, are some of the tall and small stories that grew from these adventures and misadventures on the Big Road Blues Highway Throw in Mark Hummel himself, by no means a simple man and the often insane club owners and you have the savory brew of the real life on the road Hummel manages and books the tours himself and he has his work cut out for him. Are you ready to meet some of the worldwide network of unethical bar owners and promoters, sleazy motel managers, paranoid highway patrolmen, grumpy toll booth collectors, bored waitresses and convenience store clerks, brain-dead teenage Burger King employees who can't get an order right, vengeful customs officers, unscrupulous mechanics, novice tour directors, drunken fans that regularly insist on singing and dancing on stages that provide no security, (if there is a stage)? Experience the sights, sounds and smells of riding in a van for thousands of miles and hearing every ban.
Mark Hummel was born in New Haven, Connecticut, and grew up in Los Angeles, California. He began playing the blues harmonica professionally in 1973 after moving to the San Francisco Bay Area. Mark's extensive career includes traveling the, "Big Roads" and blue highways of the United States and Europe for over thirty years as a harmonica mystro, band leader, music producer, and journal and blog writer. Big Road Blues is his first book.