The Holocaust In American Life (Paperback) 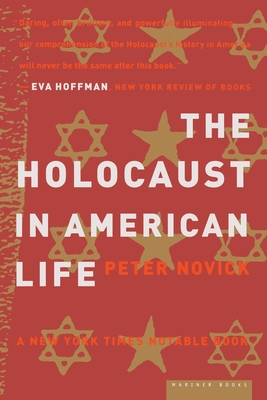 The Holocaust In American Life (Paperback)

Prize-winning historian Peter Novick illuminates the reasons Americans ignored the Holocaust for so long -- how dwelling on German crimes interfered with Cold War mobilization; how American Jews, not wanting to be thought of as victims, avoided the subject. He explores in absorbing detail the decisions that later moved the Holocaust to the center of American life: Jewish leaders invoking its memory to muster support for Israel and to come out on top in a sordid competition over what group had suffered most; politicians using it to score points with Jewish voters. With insight and sensitivity, Novick raises searching questions about these developments. Have American Jews, by making the Holocaust the emblematic Jewish experience, given Hitler a posthumous victory, tacitly endorsing his definition of Jews as despised pariahs? Does the Holocaust really teach useful lessons and sensitize us to atrocities, or, by making the Holocaust the measure, does it make lesser crimes seem "not so bad"? What are we to make of the fact that while Americans spend hundreds of millions of dollars for museums recording a European crime, there is no museum of American slavery?

"...has already established itself as one of the most controversial and thought-provoking discussions of the Holocaust and Jewish identity to date." --JEWISH TRANSCRIPT

"The history book of the year."