A Wreath for Emmett Till (Hardcover) 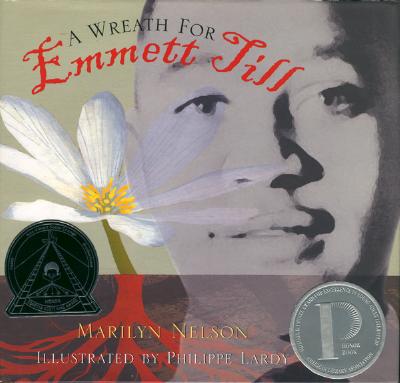 A Wreath for Emmett Till (Hardcover)

In 1955, people all over the United States knew that Emmett Louis Till was a fourteen-year-old African American boy lynched for supposedly whistling at a white woman in Mississippi. The brutality of his murder, the open-casket funeral, and the acquittal of the men tried for the crime drew wide media attention.

Award-winning poet Marilyn Nelson reminds us of the boy whose fate helped spark the civil rights movement. This martyr’s wreath, woven from a little-known but sophisticated form of poetry, challenges us to speak out against modern-day injustices, to “speak what we see.”
Philippe Tardy is an award winning illustrator whose work has appeared in the New York Times, Newsweek, Rolling Stone, The New Yorker, and the Boston Globe.

Marilyn Nelson is the author of Carver: A Life in Poems and Fields of Praise. She has won the Boston Globe–Horn Book Award, the Flora Stieglitz Straus Award, a Newbery Honor, and a Coretta Scott King Honor. Marilyn lives in Storrs, Connecticut, where she is a professor of English at the University of Connecticut.
“These poems are a powerful achievement that teens and adults will want to discuss together.” Booklist, ALA, Starred Review

"Only Marilyn Nelson can take one of the most hideous events of the 20th century and make of it something glorious: An intricate cycle of 15 sonnets--an Heroic Crown, in which the last sonnet is made up of the previous 14. . . . It's a towering achievement, one whose power and anger and love will make breath catch in the throat and bring tears to the eyes." Kirkus Reviews, Starred

"This memorial to the lynched teen is in the Homeric tradition of poet-as-historian. . . . This chosen formality brings distance and reflection to readers, but also calls attentionto the horrifically ugly events." School Library Journal, Starred

"A moving elegy indeed. . . . Nelson's penetrating elequence ensures that the lyricism marries and draws strength from the structure rather than simply serving it, and the dramatic directness of the address would make these poems powerful indeed for recitation of readers' theater." The Bulletin of the Center for Children's Books

"Emmett Till's murder by white racists in 1955 was so brutal that his mother let his tortured body testify to the ugly facts in an open-casket funeral. . . .
The elegant formality of the text, with its subtle power of tone and diction, is accentuated by Lardy's stylized, symbolically abstracted illustrations." Horn Book