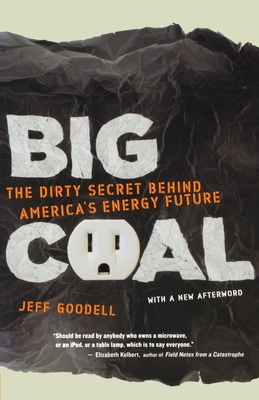 By Jeff Goodell
List Price: $21.99
Our Price: $14.95
(Save: $7.04 32%)
On Our Shelves Now
Long dismissed as a relic of a bygone era, coal is back -- with a vengence. Coal is one of the nation's biggest and most influential industries -- Big Coal provides more than half the electricity consumed by Americans today -- and its dominance is growing, driven by rising oil prices and calls for energy independence. Is coal the solution to America's energy problems?

On close examination, the glowing promise of coal quickly turns to ash. Coal mining remains a deadly and environmentally destructive industry. Nearly forty percent of the carbon dioxide released into the atmosphere each year comes from coal-fired power plants. In the last two decades, air pollution from coal plants has killed more than half a million Americans. In this eye-opening call to action, Goodell explains the costs and consequences of America's addiction to coal and discusses how we can kick the habit.
JEFF GOODELL is a contributing editor for Rolling Stone and a frequent contributor to the New York Times Magazine. He is the author of the New York Times bestseller Our Story: 77 Hours That Tested Our Friendship and Our Faith. Goodell’s memoir, Sunnyvale: The Rise and Fall of a Silicon Valley Family, was a New York Times Notable Book.

Goodell, in this well-written, timely and powerful book, makes it crystal clear what the stakes are The New York Times

The hidden truth about coal is what Jeff Goodell is after in his groundbreaking book.
Bookpage

[Goodell] turns the light on the coal industry as he tracks the black rock on a bracing, eye-opening journey.
Audubon

Goodell has a talent for pithy argument - and the book fairly crackles with informed conviction.
Publishers Weekly, Starred