Beyond the River: The Untold Story of the Heroes of the Underground Railroad (Paperback) 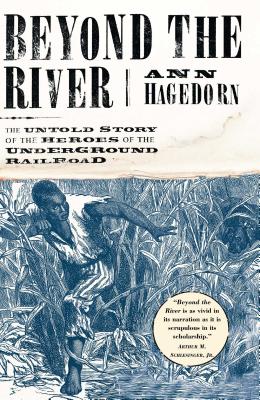 Beyond the River: The Untold Story of the Heroes of the Underground Railroad (Paperback)

By Ann Hagedorn
List Price: $18.99
Our Price: $14.00
(Save: $4.99 26%)
On Our Shelves Now
Beyond the River brings to brilliant life the dramatic story of the forgotten heroes of the Ripley, Ohio, line of the Underground Railroad.

From the highest hill above the town of Ripley, Ohio, you can see five bends in the Ohio River. You can see the hills of northern Kentucky and the rooftops of Ripley’s riverfront houses. And you can see what the abolitionist John Rankin saw from his house at the top of that hill, where for nearly forty years he placed a lantern each night to guide fugitive slaves to freedom beyond the river.

In Beyond the River, Ann Hagedorn tells the remarkable story of the participants in the Ripley line of the Underground Railroad, bringing to life the struggles of the men and women, black and white, who fought “the war before the war” along the Ohio River. Determined in their cause, Rankin, his family, and his fellow abolitionists—some of them former slaves themselves—risked their lives to guide thousands of runaways safely across the river into the free state of Ohio, even when a sensational trial in Kentucky threatened to expose the Ripley “conductors.” Rankin, the leader of the Ripley line and one of the early leaders of the antislavery movement, became nationally renowned after the publication of his Letters on American Slavery, a collection of letters he wrote to persuade his brother in Virginia to renounce slavery.

A vivid narrative about memorable people, Beyond the River is an inspiring story of courage and heroism that transports us to another era and deepens our understanding of the great social movement known as the Underground Railroad.
Ann Hagedorn has been a staff writer for The Wall Street Journal and has taught writing at Northwestern University’s Medill School of Journalism and at Columbia University’s Graduate School of Journalism. She is the author of Wild Ride, Ransom, Beyond the River, Savage Peace, Invisible Soldiers, and Sleeper Agent.
Arthur M. Schlesinger, Jr. Beyond the River is as vivid in its narration as it is scrupulous in its scholarship.

Smithsonian A groundbreaking chronicle [that] sheds new light on one of the most dramatic chapters in American history.