The Scientist in the Crib: What Early Learning Tells Us About the Mind (Paperback) 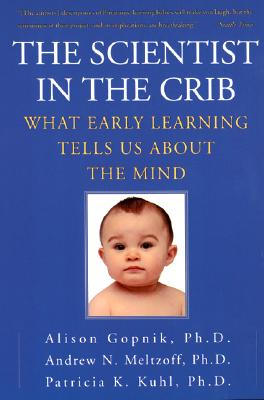 The Scientist in the Crib: What Early Learning Tells Us About the Mind (Paperback)

This exciting book by three pioneers in the new field of cognitive science discusses important discoveries about how much babies and young children know and learn, and how much parents naturally teach them. It argues that evolution designed us both to teach and learn, and that the drive to learn is our most important instinct. It also reveals as fascinating insights about our adult capacities and how even young children -- as well as adults -- use some of the same methods that allow scientists to learn so much about the world. Filled with surprise at every turn, this vivid, lucid, and often funny book gives us a new view of the inner life of children and the mysteries of the mind.

Alison Gopnik, Ph.D. is a professor of psychology at the University of California at Berkeley and a leading cognitive scientist. She is past president of the Society for Philosophy and Psychology and is the author of more than seventy papers on philosophy, psychology, and children's early learning. She has also written for The New York Review of Books and The Times Literary Supplement. Mother of three, she lives with her family in Berkeley, California.

Andrew N. Meltzoff, Ph.D. revolutionized the field of child psychology with his discoveries about how much infants know, learn, and remember. He is a professor of psychology and the University of Washington, and his research has been featured in Time, The New York Times, and museum exhibits worldwide. He and his wife, Dr. Kuhl, live with their daughter in Seattle, Washington.

Patricia K. Kuhl, Ph.D. is the world's leading authority on speech development and is a professor of speech and hearing at the University of Washington. She was one of six scientists invited to present their research at the White House Conference on Early Learning and the Brain in 1997. Her recent findings on language acquisition and why parents speak "motherese" to their children made national headlines. She and her husband, Dr. Meltzoff, live in Seattle.

“Meticulously researched, combining charm and erudition, humor and humanity, The Scientist in the Crib...should be placed in the hands of teachers, social workers, therapists, policymakers, expectant parents and everyone else who cares about children.” — The Washington Post

“The Scientist in the Crib is a triumph, a clear-headed account of the kinds of things that go on in the heads of young children....[This book] speaks in the voice of intelligent parents talking to other intelligent parents--witty, rather personal, and very well informed.” — T. Berry Brazelton, MD, Harvard Medical School

“This book is a valuable addition to parents’ libraries...After reading it, parents can be enthralled as they watch their new babies imitate and learn the ‘rules’ of communication and speech learning. What an interesting book by three eminent ‘baby watchers!’ — T. Berry Brazelton, MD, Harvard Medical School

“This book is at once a masterful synthesis of the latest findings about the minds of children and a provacative argument that young children resemble practicing scientists. Few books about human development speak so eloquently to both scholars and parents.” — Howard Gardner, Ph.D., author of Intelligence Reframed: Multiple Intelligences in the 21st Century

“[An] excellent book...it should be of interest to anyone curious about the human mind and its origins.” — The Chicago Tribune