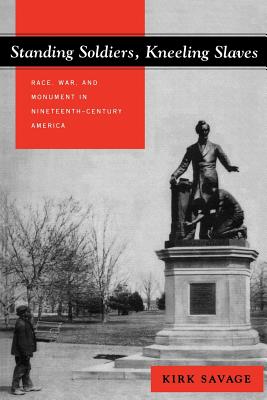 The United States of America originated as a slave society, holding millions of Africans and their descendants in bondage, and remained so until a civil war took the lives of a half million soldiers, some once slaves themselves. Standing Soldiers, Kneeling Slaves explores how that history of slavery and its violent end was told in public space--specifically in the sculptural monuments that increasingly came to dominate streets, parks, and town squares in nineteenth-century America. Here Kirk Savage shows how the greatest era of monument building in American history arose amidst struggles over race, gender, and collective memory. As men and women North and South fought to define the war's legacy in monumental art, they reshaped the cultural landscape of American nationalism.

At the same time that the Civil War challenged the nation to reexamine the meaning of freedom, Americans began to erect public monuments as never before. Savage studies this extraordinary moment in American history when a new interracial order seemed to be on the horizon, and when public sculptors tried to bring that new order into concrete form. Looking at monuments built and unbuilt, Savage shows how an old image of black slavery was perpetuated while a new image of the common white soldier was launched in public space. Faced with the challenge of Reconstruction, the nation ultimately recast itself in the mold of the ordinary white man.
Standing Soldiers, Kneeling Slaves, the first sustained investigation of monument building as a process of national and racial definition, probes a host of fascinating questions: How was slavery to be explained without exploding the myth of a united people? How did notions of heroism become racialized? And more generally, who is represented in and by monumental space? How are particular visions of history constructed by public monuments? Written in an engaging fashion, this book will appeal to a wide range of readers interested in American culture, race relations, and public art.
Kirk Savage is Associate Professor of the History of Art and Architecture at the University of Pittsburgh. He has lectured and published widely on American public monuments.