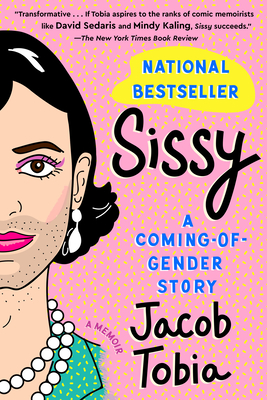 A heart-wrenching, eye-opening, and giggle-inducing memoir about what it's like to grow up not sure if you're (a) a boy, (b) a girl, (c) something in between, or (d) all of the above.

"A beautiful book . . . honest and funny."--Trevor Noah, The Daily Show
"Sensational."--Tyler Oakley
"Jacob Tobia is a force." --Good Morning America
"A trans Nora Ephron . . . both honest and didactic." --OUT Magazine
"A rallying cry for anyone who's ever felt like they don't belong." --Woman's Day

As a young child in North Carolina, Jacob Tobia wasn't the wrong gender, they just had too much of the stuff. Barbies? Yes. Playing with bugs? Absolutely. Getting muddy? Please. Princess dresses? You betcha. Jacob wanted it all, but because they were "a boy," they were told they could only have the masculine half. Acting feminine labelled them "a sissy" and brought social isolation.

It took Jacob years to discover that being "a sissy" isn't something to be ashamed of. It's a source of pride. Following Jacob through bullying and beauty contests, from Duke University to the United Nations to the podiums of the Methodist church--not to mention the parlors of the White House--this unforgettable memoir contains multitudes. A deeply personal story of trauma and healing, a powerful reflection on gender and self-acceptance, and a hilarious guidebook for wearing tacky clip-on earrings in today's world, Sissy guarantees you'll never think about gender--both other people's and your own--the same way again.
Jacob Tobia (pronouns: they/them) is a gender nonconforming writer, producer, and performer based in Los Angeles. A member of the Forbes 30 Under 30 and the OUT 100, Jacob made television history voicing the nonbinary character of Double Trouble in Netflix's She-Ra and The Princess of Power. Their writing and advocacy have been featured by The New York Times, Time, The Guardian, Good Morning America, and The Daily Show with Trevor Noah, among others. Originally from Raleigh, North Carolina, Jacob has worn high heels in the White House twice. Sissy is their debut memoir.
“[Tobia] combines incisive wit and undeniable intelligence to invite readers into their personal journey as a gender-nonconforming young person in North Carolina. . . It is in Tobia’s often self-deprecating humor that Sissy is most transformative, and where it most departs from other trans memoirs. The seriousness of the topic never feels glossed over, which allows for an organic and seamless journey from tears on one page to laughing aloud on the next. If Tobia aspires to the ranks of comic memoirists like David Sedaris and Mindy Kaling, Sissy succeeds.” —New York Times Book Review

“With bare honesty, irreverent humor, and refreshing vulnerability, this memoir is a rallying cry for anyone who's ever felt like they don't belong.” —Woman’s Day

“Sissy bravely moves the needle forward, boldly advocating for a world where people of all genders are treated equally and with dignity. A story of audacity and courage, Sissy is not to be missed.”—Billie Jean King

“Tobia is bit of a transfeminine Nora Ephron, detailing the story of their ‘coming-of-gender’ in a way that is both honest and didactic.” —OUT Magazine

"Across this country young boys are shamed and humiliated for expressing femininity, as well as young girls for expressing masculinity. Jacob bravely seeks to end this culture of shame.”—Monica Lewinsky

“A candid, unapologetic look at Tobia’s journey . . .  Sissy is a valuable dispatch from a new generation of queer activists and artists — the first generation with the power to connect to themselves en masse without apology — and it would be a blessing if all such voices were as articulate and charismatic as this one.” —Washington Post

“Jacob Tobia is a force. . . . Their voice is unique and inspirational.” —Good Morning America

“Tobia sashays away from all the expectations and trappings of what it means to be a man or woman, and calls for us to embrace the fluidity of identity.” —O, The Oprah Magazine

“You can judge Sissy by its cover, in that it evokes glamour, solitude, humor, and resilience, which are all key components to Tobia's vulnerable, moving story of what it means to grow up gender nonconforming in a gender-policed world.” —Salon

“Sensational. Gut-punchingly hilarious and full of heart, this is a book that’s sure to change your outlook and how you relate to others. Sissy is guaranteed to make your mascara run from happy and sad tears alike.”—Tyler Oakley

“A necessary read about gender, society, and the very real costs of prejudice and ignorant. . . . An honest, funny, and poignant memoir that will completely make you rethink the construct of gender.” —Bustle

“Sissy is filled with moments that will both break your heart and make you howl with laughter. . . Sissy will challenge the way you think about gender and inspire you to consider your own struggles with gender identity.” —Hello Giggles

“Genderqueer and nonbinary voices are too often silenced in mainstream conversations about gender. It's why we need writers like Jacob Tobia, who offer us more inclusive visions and provide readers living beyond the binary reflections of themselves.”—Janet Mock

“Refreshing, courageous, and important [with a] feisty candor and wit...A funny, sharply observed, and intelligent journey into self-identity.”—Kirkus Reviews

“In Sissy, Tobia adds a necessary voice to our national conversation about gender and acceptance.” —TIME

“Jacob Tobia isn’t here for your gender binary, and Sissy isn’t like any trans coming-out story you’ve heard before. . . The book is seriously funny—because Tobia is funny—in addition to being poignant. [Tobia] chronicles their meandering journey to genderqueer self-ove with joy and deeply irreverent humor. It’s an inspiring and satisfying must-read.” —Apple Books, A “Best of March” Pick

“[A] hilarious and candid memoir. Tobia thoughtfully and accessibly captures the anguish of being placed inside boxes that don’t fit—how ‘gender hurts us all’. . . Tobia’s outspoken refusal to be bound by social constrictions is admirable, and their funny, sometimes raunchy voice is a charming bonus.” —Publishers Weekly

“In their fabulous, fierce voice, Tobia tells their story of coming out as genderqueer.” —BookPage

“Sissy functions as both a celebration and rejection of popular trans narratives — gender is mutable, it's something to have fun with. But it's not a simple journey from A to B. It's a neverending puzzle, a Rubik's Cube of many colors that twists and turns to reveal different parts of yourself.” —The Advocate

“[Tobia] is a gifted storyteller...Tobia writes extremely well, with insight, lucidity, occasional anger, and, when things get too serious, wit. The result is, hands down, one of the best trans narratives available; it deserves a place in every library.”—Booklist (starred review)

“Jacob Tobia’s story is one sent from the Goddess Herself. Truly inspiring, hilarious, heartbreaking & honest — Jacob’s thrilling truth will have an overwhelming impact on the LGBTQ community and beyond; giving insight to what it means to be trans and genderqueer. I am honored and grateful to be part of any community that Jacob is in.”—Jesse Tyler Ferguson

“As someone who has served as an icon and role model for gender-fabulous people for decades, it’s been wonderful to watch Jacob blossom. Their energy, verve, and luminosity of self bring joy to so many, and I’m confident that Sissy will do the same.”—Miss J Alexander

"Dear men, please read this book. Whether you’re sensitive, bold, gay, straight, pan, bi, creative, analytical, or don’t even know who the hell you are, this book is a blueprint for healing our gender-based trauma from the inside out. It’s brilliant and important and I couldn’t put it down.”—Jay Duplass

“You’ll love getting inside Tobia’s head as they navigate the ins and outs of identity. For readers interested in gender, there is no better book to pick up this spring.” —Bookish

“Jacob is a unique and inspirational voice for living your own truth. I love their personality and message, and I can't help but creep on their Instagram ;)”—Gigi Gorgeous

“Sissy aims its glitter cannon at all binaries, delivering, even in its final pages, a surprising amount of empathy to those who have not always been Jacob’s allies. This is required reading for every human being on the planet who wants to do better and be better. Buy the book and learn something about yourself, then send it to your problematic relatives.”—Garrard Conley

“A funny, heartbreaking and earnest account of Tobia's early and young adult life. . . Readers new to stories and identities like Tobia’s will find this memoir an especially welcoming introduction to the quite simple but still revolutionary notion that there are more than two genders.” —Shelf Awareness

“Tobia shares their story in Sissy with candor, wit and sensitivity. Like Vivek Shraya’s I’m Afraid of Men, this is a book we really need.” —Ms. Magazine

“In a world full of digital noise, Jacob's words cut right to the heart. A Mindy Kaling meets Roxane Gay treasure, Sissy proclaims what we all know to be true: gender nonconforming people are a powerful part of the past, present, and future.”—Tommy Dorfman

"Gender nonconforming people like Jacob aren’t just a passing phase or a cool fad, they’re a fundamental part of our human family. Through embracing and empowering nonbinary people, we empower everyone to live a more authentic, glittering life. As a writer and an artist, I'm thrilled about what Jacob has to say.”—Dustin Lance Black

“Sissy explores the power of determination, identity, and acceptance of self and others. I recommend the read.”—Cooper Hefner

"Most of the time in this world it feels like I’m drowning—we all walk around playing pretend, telling ourselves stories so that we don’t have to confront the things that lurk beneath the surface. And it’s not so much that Jacob’s work has ‘rescued’ me from drowning—rather it’s taught me that maybe there is something generative about remaining here—underneath—in the places and spaces and conversations that people avoid. It’s this commitment to honesty—in its most visceral sense—that makes Jacob so exceptional and precious."—Alok Vaid-Menon

“In a culmination of vulnerability, honesty, and heart, Tobia highlights the connective tissue that exists beyond gender and encourages their readers to embrace what remains undefined of their identity markers.” —Paper

“This is a book that every parent should read. We owe it to the next generation to raise children who celebrate gender diversity and are empathetic towards themselves and others; Sissy encourages just that. I couldn't be more proud of what Jacob has written.” —Judy Shepard

“In a world that often pressures us to conform in order to be accepted, it is refreshing to hear Jacob Tobia's perspective. Jacob's style, charisma, humor, wit and truth telling are authentic to Jacob and I wouldn't be surprised if this book becomes a much talked about example of one way to own ones truth no matter what others may think. The world needs Jacob's voice, offering us all permission to be our truest selves.”—Sara Ramirez

“Filled with penetrating insight into what it means to live a life between genders that will also make even the straightest, cissiest reader cackle.”—Meredith Talusan

“As someone who came out as gay while playing in the NBA, I can say firsthand that being yourself against all odds takes guts. Through standing up for gender nonconforming people and living their truth for all to see, Jacob is blazing a similar trail. This book is yet another step on Jacob’s courageous road.”—Jason Collins

“For any young person who’s currently struggling with their gender, Sissy will be a source of strength, power, and much-needed laughs. From start to finish, Sissy is the kind of book that the world needs more of.”—Jazz Jennings