Devil's Bargain: Steve Bannon, Donald Trump, and the Storming of the Presidency (Hardcover) 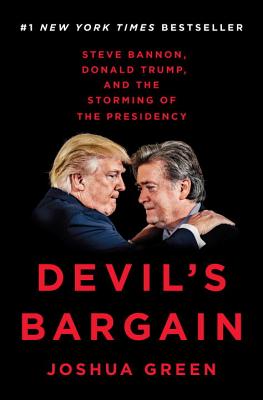 Devil's Bargain: Steve Bannon, Donald Trump, and the Storming of the Presidency (Hardcover)


On Our Shelves Now
The instant #1 New York Times bestseller.

From the reporter who was there at the very beginning comes the revealing inside story of the partnership between Steve Bannon and Donald Trump—the key to understanding the rise of the alt-right, the fall of Hillary Clinton, and the hidden forces that drove the greatest upset in American political history.

Based on dozens of interviews conducted over six years, Green spins the master narrative of the 2016 campaign from its origins in the far fringes of right-wing politics and reality television to its culmination inside Trump’s penthouse on election night.

The shocking elevation of Bannon to head Trump’s flagging presidential campaign on August 17, 2016, hit political Washington like a thunderclap and seemed to signal the meltdown of the Republican Party. Bannon was a bomb-throwing pugilist who’d never run a campaign and was despised by Democrats and Republicans alike.

Yet Bannon’s hard-edged ethno-nationalism and his elaborate, years-long plot to destroy Hillary Clinton paved the way for Trump’s unlikely victory. Trump became the avatar of a dark but powerful worldview that dominated the airwaves and spoke to voters whom others couldn’t see. Trump’s campaign was the final phase of a populist insurgency that had been building up in America for years, and Bannon, its inscrutable mastermind, believed it was the culmination of a hard-right global uprising that would change the world.

Any study of Trump’s rise to the presidency is unavoidably a study of Bannon. Devil’s Bargain is a tour-de-force telling of the remarkable confluence of circumstances that decided the election, many of them orchestrated by Bannon and his allies, who really did plot a vast, right-wing conspiracy to stop Clinton. To understand Trump's extraordinary rise and Clinton’s fall, you have to weave Trump’s story together with Bannon’s, or else it doesn't make sense.

Joshua Green is a national correspondent for Bloomberg Businessweek and a CNN political analyst. Previously, Green was a senior editor of the Atlantic, a weekly political columnist for the Boston Globe, and an editor at the Washington Monthly. He has also written for the New Yorker, Esquire, Vanity Fair, and other publications. Green regularly appears on CNN’s shows, HBO’s Real Time with Bill Maher, and PBS’s Washington Week and Frontline.

“Mr. Green is a talented reporter and a gifted storyteller. The anecdotes he records from the chaotic 2016 Trump campaign are both well chosen (they’re there for thematic reasons, not as gratuitous gossip) and brilliantly told.” —Wall Street Journal

“You won’t be able to put it down. I certainly couldn’t, surrendering a weekend I should have rightly spent with the kids. I spent it instead with a 63-year-old nationalist whom Time magazine all but called the shadow President of the United States . . . Addictive.” —Newsweek

“Deeply reported and compulsively readable . . . Green is consistently interesting on the subject of Trump. But the real value of Devil’s Bargain is the story it tells about Bannon, some of which has been previously reported (not least by Green himself) but never so well synthesized or explained as it is here.” —Bret Stephens, The New York Times

“Vividly pulls back the curtain on the symbiotic relationship between two of America’s most polarizing figures. . . . Green is nothing but prescient.” —The Guardian

“Green saw Bannon as an important figure early on and began to track his career long before other journalists. As a result, Green had the material and access to produce a deeply researched and sharply observed account of a political figure and a movement that took most of the country by surprise . . .  Readers will find no better guide to Bannon’s vision than this gripping and sometimes appalling account.” —Foreign Affairs

“One of the best, more thoroughly researched, and arguably most influential 2016 books to come out so far, Devil's Bargain is the product of years of interviews and tight reporting from journalist Joshua Green. He thrillingly tracks the influence of Steve Bannon and the alt-right on Trump's candidacy, persuasively arguing they were intrinsic to his rise and eventual victory. It's disturbing, fascinating stuff for anyone interested in this newly powerful fringe.” —Entertainment Weekly

“In this important and vivid book, the veteran journalist Joshua Green . . . examines the role of Bannon, the man who, on convincing evidence laid out here, was instrumental in securing the most improbable election victory in modern political history.” —The Times (London)

“Delicious from page one.” —Pittsburgh Post-Gazette

“Fast-paced, crisp, and cogent, this is a first look into a dark corner of history whose ramifications are only beginning to be understood." —PopMatters

“Fascinating . . . required reading for anyone interested in the future.”  —Janet Maslin, The New York Times

“Absorbing . . . the first thing I’ve read in the last year and a half that manages to make some sense of the human catastrophic weather event that is Steve Bannon.” —The Millions


“Behind the scenes and ripped from the headlines, Green’s saga exuberantly traces Trump’s wild ride to the presidency.” —Kirkus