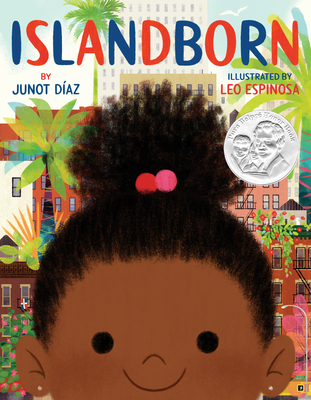 “Islandborn is a delightful picture book about celebrating your heritage. Lola's teacher has asked the class to draw a picture of their first home. While the whole room grows loud with excitement over what they will draw, Lola sits quietly at her desk. Lola doesn't remember her first home, the Island. How will she draw a picture if she can't remember anything about the Island? With help from her family and neighbors, Lola learns that the Island will always be with her. A great picture book for the whole family, with vibrant illustrations that jump off the page.”
— Jen Steele, Boswell Book Company, Milwaukee, WI

From New York Times bestseller and Pulitzer Prize winner Junot Díaz comes a debut picture book about the magic of memory and the infinite power of the imagination.

Every kid in Lola's school was from somewhere else.
Hers was a school of faraway places.

So when Lola's teacher asks the students to draw a picture of where their families immigrated from, all the kids are excited. Except Lola. She can't remember The Island—she left when she was just a baby. But with the help of her family and friends, and their memories—joyous, fantastical, heartbreaking, and frightening—Lola's imagination takes her on an extraordinary journey back to The Island.  As she draws closer to the heart of her family's story, Lola comes to understand the truth of her abuela's words: “Just because you don't remember a place doesn't mean it's not in you.”

Gloriously illustrated and lyrically written, Islandborn is a celebration of creativity, diversity, and our imagination's boundless ability to connect us—to our families, to our past and to ourselves.
Junot Díaz was born in the Dominican Republic and raised in New Jersey. He is the author of the critically acclaimed Drown; The Brief Wondrous Life of Oscar Wao, which won the 2008 Pulitzer Prize and the National Book Critics Circle Award; and This Is How You Lose Her, a New York Times bestseller and National Book Award finalist. A graduate of Rutgers University, Díaz is currently the fiction editor at Boston Review and the Rudge and Nancy Allen Professor of Writing at the Massachusetts Institute of Technology.

Leo Espinosa is an award-winning illustrator and designer from Bogotá, Colombia, whose work has been featured in The New Yorker, Wired, Esquire, The New York Times, The Atlantic, and more. Leo's illustrations have been recognized by American Illustration, Communication Arts, Pictoplasma, 3x3, and the Society of Illustrators. Leo lives with his family in Salt Lake City, Utah.
★ "With his tenacious, curious heroine and a voice that’s chatty, passionate, wise, and loving, Díaz entices readers to think about a fundamental human question: what does it mean to belong?"–Publishers Weekly, starred review

★ “A sensitive and beautiful story of culture, identity, and belonging—a superb picture book outing for Díaz and one to be shared broadly in a variety of settings.” –School Library Journal, starred review


★ “This important title will be enjoyed by young children and may spark many significant discussions.” –Booklist, starred review