Against the Vietnam War: Writings by Activists, Revised Edition (Paperback) 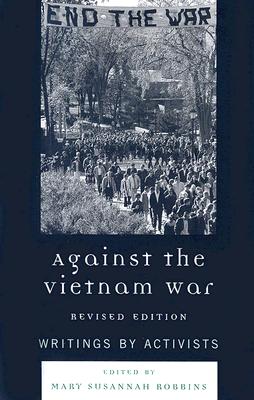 Against the Vietnam War: Writings by Activists, Revised Edition (Paperback)

By Mary Susannah Robbins (Editor), Arlene Ash (Contribution by), William Ayers (Contribution by)
List Price: $52.00
Our Price: $17.95
(Save: $34.05 65%)
On Our Shelves Now
For some, it was a movement for peace. For others, it was a war against the war. In the eyes of certain participants, the movement was cultural and social at its core, a matter of changing society. Still others defined their protests as political and sought out the economic root causes of the war. What many would agree upon was that it was a time when a remarkable generation came of age and a great nation was shaken to its very foundations. The protest movement in opposition to the Vietnam War was a complex amalgam of political, social, economic, and cultural motivations, factors, and events. Against the Vietnam War brings together the different facets of that movement and its various shades of opinion. Here the participants themselves offer statements and reflections on their activism, the era, and the consequences of a war that spanned three decades and changed the United States of America. The keynote is on individual experience in a time when almost every event had national and international significance. A foreword by Staughton Lynd considers the events of the Vietnam War in the context of the present war in Iraq.
Mary Susannah Robbins, Ph.D., has taught English literature at Vassar College and runs her own editorial services company in Cambridge, Massachusetts. Her poems, stories, and prints have appeared in various magazines including Ploughshares and Confrontation, and she is the editor of the forthcoming book Peace Not Terror: Leading Thinkers Show the Way Out of Perpetual War.