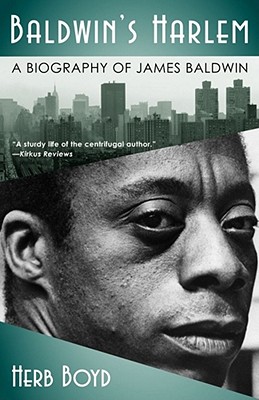 
On Our Shelves Now
Baldwin's Harlem is an intimate
portrait of the life and genius of one
of our most brilliant literary minds:
James Baldwin.

Perhaps no other writer is as synonymous with Harlem as James Baldwin (1924-1987). The events there that shaped his youth greatly influenced Baldwin's work, much of which focused on his experiences as a black man in white America. Go Tell It on the Mountain, The Fire Next Time, Notes of a Native Son, and Giovanni's Room are just a few of his classic fiction and nonfiction books that remain an essential part of the American canon.

In Baldwin's Harlem, award-winning journalist Herb Boyd combines impeccable biographical research with astute literary criticism, and reveals to readers Baldwin's association with Harlem on both metaphorical and realistic levels. For example, Boyd describes Baldwin's relationship with Harlem Renaissance poet laureate Countee Cullen, who taught Baldwin French in the ninth grade. Packed with telling anecdotes, Baldwin's Harlem illuminates the writer's diverse views and impressions of the community that would remain a consistent presence in virtually all of his writing.

Baldwin's Harlem provides an intelligent and enlightening look at one of America's most important literary enclaves.
HERB BOYD is an award-winning author and journalist who has published eighteen books and countless articles in national magazines and newspapers. Among his most popular books are We Shall Overcome and The Harlem Reader. Currently he is managing editor for The Black World Today and teaches at The City College of New York and the College of New Rochelle in the Bronx. He lives in Harlem with his wife.
"Fascinating and authoritative."
--Arnold Rampersad

"Herb Boyd's study of Baldwin and Harlem features vivid literary portraits of a powerful writer in sometimes controversial dialogue with other major figures of his era. It also centers Baldwin's Harlem in a memorable, necessary way. Boyd's book is fascinating and authoritative on a subject that he knows well and writes about with insight and sympathy."
-- Arnold Rampersad, author of Ralph Ellison: A Biography

"Herb Boyd has written an original and extremely valuable book that captures the genius and complexity of James Baldwin, one of the greatest writers of the twentieth century."
-- Sondra Kathryn Wilson, author of Meet Me at the Theresa

"Herb Boyd takes Baldwin away from the ivory towers of literary scholars and elites, and centers him with, and within, the experience of his people. Required reading."
-- Todd Steven Burroughs, Ph.D., journalist