A Radical History of the World (Paperback) 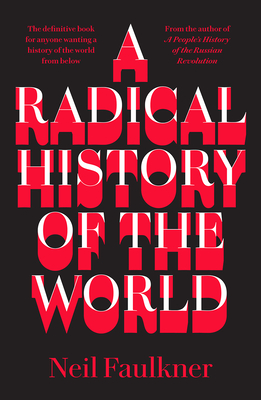 A Radical History of the World (Paperback)

“One of the finest historians on the left.”—John Newsinger, author, The Blood Never Dried


Rejecting the top-down approach of conventional history, Neil Faulkner contends that it is the mass action of ordinary people that drives the transformative events of our many histories. This is a history of power, abuse, and greed, but also one of liberation, progress, and solidarity.

From the hunter-gatherers two million years ago to the ancient empires of Persia and China, and from the Russian Revolution to modern imperialism, humans have always struggled to create a better society than what came before. All over the world at numerous points in the past, a different way of life has become an absolute necessity, over and over again. This is a history of the humans in these struggles—the hominid and the hunter, the emperor and the slave, the dictator and the revolutionary.

Reading against the grain of mainstream histories, Neil Faulkner reveals that what happened in the past has never been predetermined. From antiquity to feudalism, and from fascism to our precarious political present, choices have always been numerous and complex, and the possible outcomes have ranged broadly between liberation and barbarism. His chapters include:

In our fraught political present—as we face the loss of civil liberties and environmental protections, the rise of ethnonationalism, and the looming threat of nuclear war—we need the perspective of these histories now more than ever. The lesson of A Radical History of the World is that, if we created our past, we can also create a better future.
Neil Faulkner is a historian and archaeologist and the author of numerous books, including, most recently, A People’s History of the Russian Revolution, also published by Pluto Press.

“One of the finest historians on the left.”

— John Newsinger, author of The Blood Never Dried: A People's History of the British Empire

“In a world of deepening danger where reactionary narratives continue to hijack the mainstream, Neil Faulkner makes a powerful and necessary case reminding us of the truly radical history driving human social and political evolution.”