The Astonishing Life of Octavian Nothing, Traitor to the Nation, Volume II: The Kingdom on the Waves (Paperback) 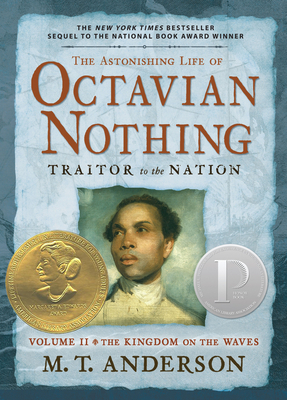 The Astonishing Life of Octavian Nothing, Traitor to the Nation, Volume II: The Kingdom on the Waves (Paperback)

“This historical novel transports the reader to the early days of America's revolution. The future is open, everything is up in the air, and the hardest choice is one of loyalty: Should Octavian fight for the rebels who want to keep him a slave, or should he follow hope and side with the royalists who promise him personal freedom? Anderson's sequel to his award-winning The Astonishing Life of Octavian Nothing is a provocative story that continues to enlarge the young adult novel in thoughtful, glorious ways.”
— Mark David Bradshaw, Watermark Books, Wichita, KS

"A novel of the first rank, the kind of monumental work Italo Calvino called ‘encyclopedic’ in the way it sweeps up history into a comprehensible and deeply textured pattern." — The New York Times Book Review

Fearing a death sentence, Octavian and his tutor, Dr. Trefusis, escape through rising tides and pouring rain to find shelter in British-occupied Boston. Sundered from all he knows — the College of Lucidity, the rebel cause — Octavian hopes to find safe harbor. Instead, he is soon to learn of Lord Dunmore's proclamation offering freedom to slaves who join the counterrevolutionary forces.

In Volume II of his unparalleled masterwork, M. T. Anderson recounts Octavian's experiences as the Revolutionary War explodes around him, thrusting him into intense battles and tantalizing him with elusive visions of liberty. Ultimately, this astonishing narrative escalates to a startling, deeply satisfying climax, while reexamining our national origins in a singularly provocative light.
A sweeping and epic novel…will someday be recognized as a novel of the first rank, the kind of monumental work Italo Calvino called ‘encyclopedic’ in the way it sweeps up history into a comprehensive and deeply textured pattern.
—New York Times Book Review

With an eye trained to the hypocrisies and conflicted loyalties of the American Revolution, Anderson resoundingly concludes the finely nuanced bildungsroman begun in his National Book Award–winning novel.
—Publishers Weekly (starred review)

Awe-inspiring...Even more present in this volume are passionate questions, directly relevant to teens’ lives, about basic human struggles for independence, identity, freedom, love, and the need to reconcile the past.
—Booklist (starred review)

One of the few volumes to fully comprehend the paradoxes of the struggle for liberty in America.
—Kirkus Reviews (starred review)

Octavian’s introspection born of a philosopher’s upbringing adds depth to the tale…a fast-moving plot…a satisfying finality to the story.
—Bulletin of the Center for Children's Books (starred review)

Places Octavian at the heart of…harrowing historical episodes underscoring the bleakness of a tale that is ultimately about the melancholy predicament of a brilliantly educated and appealing young black man in a world that has no place for him.
—Wall Street Journal

This deeply moving re-imagining of a little-known episode in American history should be required reading not only for high school students of the American Revolution, but, I would argue, for anyone who wants to see just what brilliance is possible in so-called children's books.
—Bookpage

A singular achievement, a work of historical fiction that feels truly original and seems destined to endure.
—San Francisco Chronicle

Open-ended, deliberately unclear about what happens next…the young man now seems to look within himself for the strength to live the rest of his life rather than looking toward one political side or the other. Readers end the stories awed by the overwhelming nature of the obstacles the characters face and by their persistent strength as survivors.
—Chicago Tribune

Anderson's powerful and unforgettable novel is a vital contribution to the ongoing national conversation on the subject [slavery] and its effects on into the present day.
—Los Angeles Times

The riveting saga… poses questions about our nation's hard-won liberty that are as illuminating as they are disturbing.
—St. Louis Post-Dispatch

The story continues to be a gripping one, unusual in offering a lens through which to see the Revolutionary War different from that to which Americans have been exposed — the views of a black man sympathetic, for the most part, to the king…It's a truly courageous undertaking, ambitious in its scope in ways unparalleled by any other author working in this genre.
—Houston Chronicle

One of the best-written - and most challenging - young adult books I've ever read.
—The Millions blog