The Word for World is Forest (Paperback) 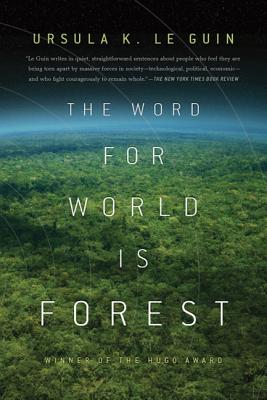 The Word for World is Forest (Paperback)

The award-winning masterpiece by one of today's most honored writers, Ursula K. Le Guin!

The Word for World is Forest

When the inhabitants of a peaceful world are conquered by the bloodthirsty yumens, their existence is irrevocably altered. Forced into servitude, the Athsheans find themselves at the mercy of their brutal masters.

Desperation causes the Athsheans, led by Selver, to retaliate against their captors, abandoning their strictures against violence. But in defending their lives, they have endangered the very foundations of their society. For every blow against the invaders is a blow to the humanity of the Athsheans. And once the killing starts, there is no turning back.

URSULA K. LE GUIN (1929-2018) was the celebrated and beloved author of numerous groundbreaking works, such as The Left Hand of Darkness, A Wizard of Earthsea, and The Dispossessed. The breadth and imagination of her work earned her six Nebulas, nine Hugos, and SFWA’s Grand Master, along with the PEN/Malamud and many other awards. In 2014 she was awarded the National Book Foundation Medal for Distinguished Contribution to American Letters, and in 2016 joined the short list of authors to be published in their lifetimes by the Library of America.

“Le Guin writes in quiet, straightforward sentences about people who feel they are being torn apart by massive forces in society— technological, political, economic—and who fight courageously to remain whole.” —The New York Times Book Review

“Like all great writers of fiction, Ursula K. L e Guin creates imaginary worlds that restore us, hearts eased, to our own.” —The Boston Globe