The State of Jones: The Small Southern County that Seceded from the Confederacy (Paperback) 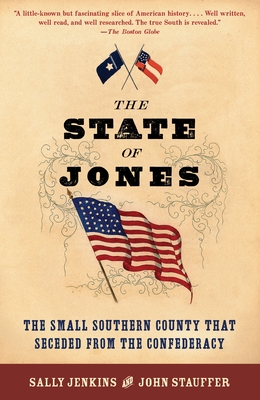 The State of Jones: The Small Southern County that Seceded from the Confederacy (Paperback)


On Our Shelves Now
Covering the same ground as the major motion picture The Free State of Jones, starring Matthew McConaughey, this is the extraordinary true story of the anti-slavery Southern farmer who brought together poor whites, army deserters and runaway slaves to fight the Confederacy in deepest Mississippi. "Moving and powerful." -- The Washington Post.

In 1863, after surviving the devastating Battle of Corinth, Newton Knight, a poor farmer from Mississippi, deserted the Confederate Army and began a guerrilla battle against it. A pro-Union sympathizer in the deep South who refused to fight a rich man’s war for slavery and cotton, for two years he and other residents of Jones County engaged in an insurrection that would have repercussions far beyond the scope of the Civil War. In this dramatic account of an almost forgotten chapter of American history, Sally Jenkins and John Stauffer upend the traditional myth of the Confederacy as a heroic and unified Lost Cause, revealing the fractures within the South.
Sally Jenkins is an award-winning journalist for the Washington Post and the author of eight books, three of which were New York Times bestsellers, most notably It’s Not About the Bike with Lance Armstrong. Her work has been featured in GQ and Sports Illustrated, and she has acted as a correspondent on CNBC as well as on NPR's All Things Considered. She lives in New York City.

John Stauffer is chair and professor of the History of American Civilization at Harvard University and the award-winning author of The Black Hearts of Men and other books on the Civil War era, including Giants: The Parallel Lives of Frederick Douglass and Abraham Lincoln. He lives in Cambridge, Massachusetts.
“A little known but fascinating slice of American history. . . . Well written, well read, and well researched. The true South is revealed.”
—The Boston Globe

“Moving and powerful. . . . An important story that personalizes what remains abstract and counterintuitive in much of our received history of the Civil War, even as we approach its 150th anniversary.”
—The Washington Post

“Informed. . . . Impressive. . . . The saga is related in fascinating detail.”
—The Atlanta Journal-Constitution

“Just when you thought you had heard it all about the Civil War, along comes this astonishing tale of rebellion within the heart of rebel territory. This is a riveting and memorable read about resistance, courage, love and, most of all, the long trail of justice and injustice in the American South. I couldn’t put it down.”
—Tom Brokaw

“Jenkins and Stauffer have brought fresh attention to a little-known and interesting sidebar of Civil War history.”
—Wall Street Journal

“Fascinating. . . . The book fittingly combines crisp narrative with exhaustive historical context. . . . Jenkins and Stauffer succeed in telling the complex history of the Civil War, and its disastrous Reconstruction aftermath, through the steely eyes of this crusty old man.”
—Minneapolis Star-Tribune

“A richly detailed, riveting and revealing account of this long-forgotten rebellion within a rebellion.”
—Tulsa World

“History at its finest and most captivating. The documentation is meticulous, yet this gem of a book reads like a novel, with a revelation at every turn. Jenkins and Stauffer have proved once again that the real history of this country is far more complex and fascinating than the prevailing mythology.”
—David Maraniss, author of They Marched Into Sunlight and When Pride Still Mattered

“Jenkins and Stauffer dug deep into state and military records to spin this fascinating yarn, and their bibliography is augmented by extensive (and intriguing) notes. . . . The State of Jones is a treasure. It’s a window into an obscure corner of Mississippi’s history and an account that further challenges myths of a South unified behind a ‘glorious’ cause.”
—The Virginian-Pilot

“Jenkins and Stauffer tell the fascinating tale of an unforgettable figure. . . . They follow the Knight family’s extraordinary lives over the course of six decades and in the process open a window onto a forgotten corner of the American landscape.”
—Philip B. Kunhardt III, co-author of Looking for Lincoln

“Here is the Civil War as it really was. You can’t fully know America’s epic until you’ve read this powerful book.”
—David Von Drehle, author of Triangle: The Fire That Changed America

“Highly recommended to Civil War aficionados. . . . The story is quite intriguing and will keep the reader looking forward to the next page.”
—The Oklahoman

“Jones and Stauffer tell this story with verve and insight, providing a richly detailed, dramatic narrative that is a valuable contribution to the historical literature.”
—James Simon, author of Lincoln and Chief Justice Taney

“An entertaining, informative book about a courageous group of Southerners clearly ahead of their time. It offers a refreshing look at the issues surrounding the Civil War, and some delightful surprises for even the most knowledgeable history buff.”
—BookPage

“Gripping. . . . Lively. . . . [Knight’s] story is sad but fascinating, a little known chapter in the history of the Deep South. Jenkins and Stauffer tell it well.”
—The Advocate (Baton Rouge)

“A marvelous story of loyalty and treason, race and blood, war and peace. The State of Jones is as compelling as it is unlikely, a tale of insurrection that illuminates the larger insurrection of our Civil War.”
—Rick Atkinson, author of An Army at Dawn

“In The State of Jones, Jenkins and Stauffer locate the real Civil War—and the story of our greatest national trial—in all of its specificity and moral complexity. . . . Their intuition about why history of this kind matters is unfailing.”
—Steve Coll, author of Ghost Wars