Villa and Zapata: A History of the Mexican Revolution (Paperback) 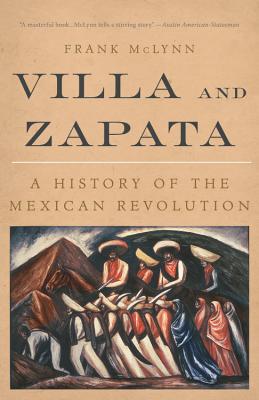 Villa and Zapata: A History of the Mexican Revolution (Paperback)


On Our Shelves Now
A stirring, authoritative account of the Mexican Revolution, told through the lives of its infamous rebel-outlaws: Pancho Villa and Emiliano Zapata

Villa and Zapata vividly chronicles the decade of bloody events that followed the eruption of the Mexican Revolution in 1910 and made legends of the rebels Francisco "Pancho" Villa and Emiliano Zapata. Mexico's was the first massive social revolution of the twentieth century, visiting economic, cultural, and racial strife on a country already exploited by oppressive officials and crippled by poverty, but also offering hope to its people. The ruthless Villa and his army of ex-cowboys in the north and Zapata, recruiting his infantry from the sugar plantations of the south, successfully waged a devastating war on two fronts and brought down a string of autocrats in Mexico City. But the two men failed to make common cause and ultimately fell victim to intrigues more treacherous than their own.
Frank McLynn is a highly regarded historian and the author of more than twenty critically acclaimed biographies, including Marcus Aurelius and Richard & John. A graduate of Wadham College, Oxford, and London University, where he obtained his doctorate, he lives and writes in England.
"Refreshing....Frank McLynn has plunged into an important episode of the modern Mexican experience--namely, the social and political revolution that rocked the country for some twenty years, cost two million lives and reshaped its institutions."—Wall Street Journal

"A masterful book....McLynn tells a stirring story and tells it so well that you can hear the strains of the Mexican patriotic standard, 'Zacatecas,' as you read it. His is an enthralling work, a page-turner that is sophisticated."—Austin American-Statesman

"In a rare accomplishment, McLynn presents his topic in a logical and understandable manner while also incorporating the latest research. McLynn has produced a judicious analytical account of the Mexican Revolution of 1910-1920. His narrative is lively and witty, leading the reader into this thoughtful study."—Library Journal

"Exhaustively researched....The author makes this informative, insightful study even more compelling with his witty and fluid prose. McLynn grasps so completely and communicates so deftly the nuances of government and corruption...that this book feels less like a history than a great story, as exciting as a Saturday serial Western."—Publishers Weekly

"Vivid....This work has its own charm [and] gives the essence of the period."—Choice Magazine