With My Own Eyes: A Lakota Woman Tells Her People's History (Paperback) 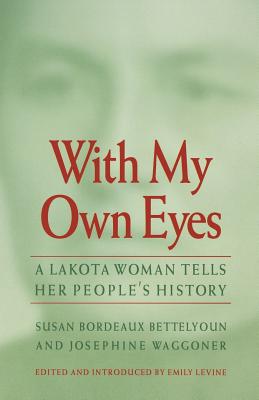 With My Own Eyes: A Lakota Woman Tells Her People's History (Paperback)


On Our Shelves Now
With My Own Eyes tells the history of the nineteenth-century Lakotas. Susan Bordeaux Bettelyoun (1857–1945), the daughter of a French-American fur trader and a Brulé Lakota woman, was raised near Fort Laramie and experienced firsthand the often devastating changes forced on the Lakotas. As Bettelyoun grew older, she became increasingly dissatisfied with the way her people’s history was being represented by non-Natives. With My Own Eyes represents her attempt to correct misconceptions about Lakota history. Bettelyoun’s narrative was recorded during the 1930s by another Lakota historian, Josephine Waggoner. This detailed, insightful account of Lakota history was never previously published.
Emily Levine is a longtime landscaper in Lincoln, Nebraska.
“Bettelyoun’s stories raise important questions about other cultures and particularly oral cultures: whose voice is heard, whose truth counts, and what is true and false about the history of the American West. . . . Bettelyoun’s stories allow readers to hear the voice of a person moving back and forth between several cultures and truths. An important addition to history.”—Choice

“An unmatched perspective on the struggle of the Lakota against the white tide of Manifest Destiny.”—News from Indian Country

“This book is quite unusual in being a firsthand account of 19th-century Sioux life by a woman. It is also a very readable and fascinating account of a key period in Plains Indian life.”—Library Journal