How I Discovered Poetry (Hardcover) 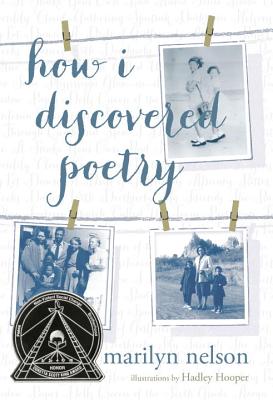 How I Discovered Poetry (Hardcover)


On Our Shelves Now
A powerful and thought-provoking Civil Rights era memoir from one of America’s most celebrated poets.

Looking back on her childhood in the 1950s, Newbery Honor winner and National Book Award finalist Marilyn Nelson tells the story of her development as an artist and young woman through fifty eye-opening poems. Readers are given an intimate portrait of her growing self-awareness and artistic inspiration along with a larger view of the world around her: racial tensions, the Cold War era, and the first stirrings of the feminist movement.

A first-person account of African-American history, this is a book to study, discuss, and treasure.
Marilyn Nelson is a three-time National Book Award Finalist, has won a Newbery Honor, a Printz Honor and several Coretta Scott King Honors, and has received several prestigious poetry awards, including the Poets' Prize and the Robert Frost Medal "for distinguished lifetime service to American poetry." She has recently been a judge of poetry applicants at the National Endowment for the Arts and Yaddo, and has received three honorary doctorates.
A 2015 Coretta Scott King Author Honor Book
A 2015 ALA Notable Children's Book
A Horn Book Fanfare Book
A Bulletin of the Center for Children's Books Blue Ribbon Book
NPR's Book Concierge 2014 Great Reads List

“An intimate perspective on a tumultuous era and an homage to the power of language.”—Publishers Weekly, starred review

“Use this bring a vivid personal touch to an exploration of the era, or as a gloriously personal entry in a poetry unit.”—Bulletin of the Center for Children’s Books, starred review

“With sophisticated wordplay and poignantly spare description, this lyric bildungsroman creates as effective a portrait of race relations in 20th-century America as of formative moments in Nelson’s youth.”—Kirkus