Nickel and Dimed: On (Not) Getting By in America (Paperback) 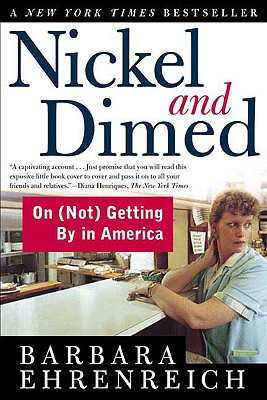 Nickel and Dimed: On (Not) Getting By in America (Paperback)


On Our Shelves Now
The "New York Times" bestseller, and one of the most talked about books of the year, Ni"ckel and Dimed" has already become a classic of undercover reportage.
Millions of Americans work for poverty-level wages, and one day Barbara Ehrenreich decided to join them. She was inspired in part by the rhetoric surrounding welfare reform, which promised that any job equals a better life. But how can anyone survive, let alone prosper, on $6 to $7 an hour? To find out, Ehrenreich moved from Florida to Maine to Minnesota, taking the cheapest lodgings available and accepting work as a waitress, hotel maid, house cleaner, nursing-home aide, and Wal-Mart salesperson. She soon discovered that even the "lowliest" occupations require exhausting mental and physical efforts. And one job is not enough; you need at least two if you intend to live indoors.
"Nickel and Dimed" reveals low-wage America in all its tenacity, anxiety, and surprising generosity -- a land of Big Boxes, fast food, and a thousand desperate strategies for survival. Instantly acclaimed for its insight, humor, and passion, this book is changing the way America perceives its working poor.

Barbara Ehrenreich is the author of twelve books, including the "New York Times" bestseller "The Worst Years of Our Lives," as well as "Fear of Falling" and "Blood Rites." She lives near Key West, Florida.

". . . you will read this explosive little book cover to cover and pass it on to all your friends and relatives."
--Diana Henriques, The New York Times [Business Section]

"With grace and wit, Ehrenreich discovers . . . the irony of being nickel and dimed during unprecedented prosperity."
--Eileen Boris, The Boston Globe

"Barbara Ehrenreich . . . is our premier reporter of the underside of capitalism."
--Dorothy Gallagher, The New York Times Book