END_OF_DOCUMENT_TOKEN_TO_BE_REPLACED

A Question of Torture: CIA Interrogation, from the Cold War to the War on Terror (American Empire Project) (Paperback) 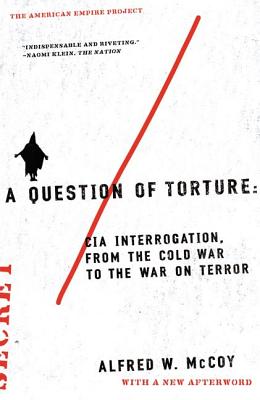 "An indispensable and riveting account" of the CIA's development and use of torture, from the cold war to Abu Ghraib and beyond (Naomi Klein, The Nation)

In this revelatory account of the CIA's fifty-year effort to develop new forms of torture, historian Alfred W. McCoy locates the deep roots of recent scandals at Abu Ghraib and Guantánamo in a long-standing, covert program of interrogation. A Question of Torture investigates the CIA's practice of "sensory deprivation" and "self-inflicted pain," in which techniques including isolation, hooding, hours of standing, and manipulation of time assault the victim's senses and destroy the basis of personal identity. McCoy traces the spread of these practices across the globe, from Vietnam to Iran to Central America, and argues that after 9/11, psychological torture became the weapon of choice in the CIA's global prisons, reinforced by "rendition" of detainees to "torture-friendly" countries. Finally, McCoy shows that information extracted by coercion is worthless, making a strong case for the FBI's legal methods of interrogation.

Scrupulously documented and grippingly told, A Question of Torture is a devastating indictment of inhumane practices that have damaged America's laws, military, and international standing.

Alfred W. McCoy is a professor of history at the University of Wisconsin-Madison. He is the author of numerous books and articles, including The Politics of Heroin in Southeast Asia and Closer Than Brothers.