END_OF_DOCUMENT_TOKEN_TO_BE_REPLACED

Heart of the Rock: The Indian Invasion of Alcatraz (Paperback) 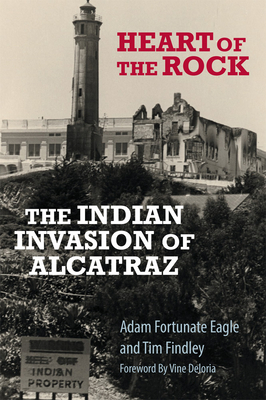 In 1969, Ricahrd Oakes and Adam Fortunate Eagle, then known as Adam Nordwall, instigated an invasion of Alcatraz by American Indians. From the mainland, Fortunate Eagle orchestrated the events, but they assumed an uncontrollable life of their own. Fortunate Eagle provides an intimate memoir of the occupation and the events leading up to it. Accompanied by a variety of photographs capturing the people, places, and actions involved, Heart of the Rock brings these turbulent times vividly to life.

From the start, public support was strong. Money poured in from around the country. Sausalito sailors and their navy transported supplies and people to the island. San Fransisco restaurants sent Thanksgiving dinner. A school was started; chores and responsibilities were shared by everyone. Alcatraz became home, and American Indians of all tribes became a family.

But the occupation lasted two years, and Oakes, who had become it spokesman, left after his stepdaughter's death on the island. Memoranda from the White House recommended doing anything to turn the public against the occupation so it could be ended. Water and electricity were cut off, reports of conflict on the island began appearing in the press, and suspicious fires burned five buildings. Nevertheless, the occupation of Alcatraz remains what historian Vine Deloria, Jr. has called perhaps the most significant Indian action since the Little Bighorn.