An Afro-Indigenous History of the United States (REVISIONING HISTORY) (Hardcover) 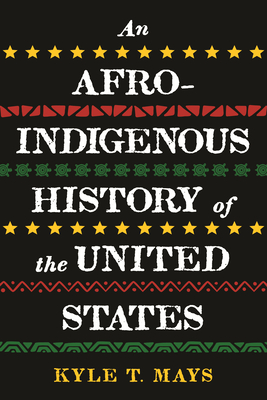 An Afro-Indigenous History of the United States (REVISIONING HISTORY) (Hardcover)

Beginning with pre-Revolutionary America and moving into the movement for Black lives and contemporary Indigenous activism, Afro-Indigenous historian Kyle T. Mays argues that the foundations of the US are rooted in antiblackness and settler colonialism, and that these parallel oppressions continue into the present. He explores how Black and Indigenous peoples have always resisted and struggled for freedom, sometimes together, and sometimes apart. Whether to end African enslavement and Indigenous removal or eradicate capitalism and colonialism, Mays show how the fervor of Black and Indigenous peoples calls for justice have consistently sought to uproot white supremacy.

Mays uses a wide-array of historical activists and pop culture icons, “sacred” texts, and foundational texts like the Declaration of Independence and Democracy in America. He covers the civil rights movement and freedom struggles of the 1960s and 1970s, and explores current debates around the use of Native American imagery and the cultural appropriation of Black culture. Mays compels us to rethink both our history as well as contemporary debates and to imagine the powerful possibilities of Afro-Indigenous solidarity.

Includes an 8-page photo insert featuring Kwame Ture with Dennis Banks and Russell Means at the Wounded Knee Trials; Angela Davis walking with Oren Lyons after he leaves Wounded Knee, SD; former South African president Nelson Mandela with Clyde Bellecourt; and more.
Kyle T. Mays is an Afro-Indigenous (Saginaw Chippewa) writer and scholar of US history, urban studies, race relations, and contemporary popular culture. He is an Assistant Professor of African American Studies, American Indian Studies, and History at the University of California, Los Angeles. He is the author of Hip Hop Beats, Indigenous Rhymes: Modernity and Hip Hop in Indigenous North America.
“Nuanced and illuminating, this book is a worthy addition to a remarkable series.”
—Booklist

“This book reveals uncomfortable truths about the dehumanizing legacies of both capitalism and colonialism while forging a path of reconciliation between the Black and Native communities. Mays offers a solid entry point for further study. An enlightening reexamination of American history.”
—Kirkus Reviews

“Accessible and informative . . . Mays’s colloquial voice enlivens the often-distressing history . . . This immersive revisionist history sheds light on an overlooked aspect of the American past.”
—Publishers Weekly

“This book underscores the importance of the bold truth-telling of American history. We all benefit when historians like Mays focus on dismantling misconceptions about Black and Indigenous struggles for liberation, justice, and unity.”
—City Book Review

“Dr. Mays reminds us that both the ‘Indian problem’ and the ‘Negro problem’ are, in fact, a white supremacist problem.”
—Melanin Mvskoke, Afro-Indigenous (Mvskoke Creek) activist

“Reading An Afro-Indigenous History of the US in addition to Beacon Press’s ReVisioning American History series more generally—are one among the many actions available to us for opening our hearts and minds into widening our circles of compassion and deeper solidarity across our differences.”
—The Rev. Dr. Carl Gregg, minister of the Unitarian Universalist Congregation of Frederick, Maryland

“Framed as an answer to questions in Mays’s life as well as in his scholarship, this is a startlingly ambitious and deeply engaging study. . . . Mays changes also the whole story of US whiteness as a system of thought and power. A perfect book to be read . . . to understand the mess we are in and the resources of those who resist.”
—David Roediger, author of How Race Survived US History

“Required reading to comprehend the deep historical relationship between the Indigenous peoples who were transported from Africa into chattel slavery and the Indigenous peoples who were displaced by European settler colonialism to profit from the land and resources, two parallel realities in search of self-determination and justice.”
—Roxanne Dunbar-Ortiz, author of An Indigenous Peoples’ History of the United States

“While we know that slavery and settler colonialism are intricately linked, Kyle Mays uniquely demonstrates that the afterlives of these two institutions are also linked. They provide the land, bodies, and capital for ‘newer’ systems of bondage to flourish, such as mass incarceration. You will never think of the peoples’ history the same way after reading An Afro-Indigenous History of the United States.”
—Robin D. G. Kelley, author of Freedom Dreams: The Black Radical Imagination

“Only twenty years ago, Kyle Mays’s voice wouldn’t even have passed through academia’s and media’s gatekeepers. The fact that a voice like this can be heard today and tell his own story is unexpected great news for America . . . and it’s just the beginning.”
—Raoul Peck, director of I Am Not Your Negro and Exterminate All the Brutes