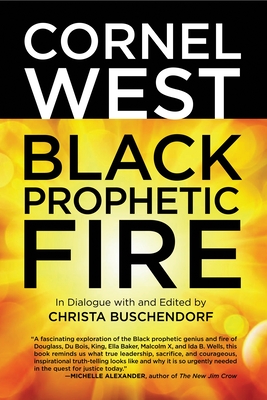 
On Our Shelves Now
An unflinching look at nineteenth- and twentieth-century African American leaders and their visionary legacies.

In an accessible, conversational format, Cornel West, with distinguished scholar Christa Buschendorf, provides a fresh perspective on six revolutionary African American leaders: Frederick Douglass, W. E. B. Du Bois, Martin Luther King Jr., Ella Baker, Malcolm X, and Ida B. Wells. In dialogue with Buschendorf, West examines the impact of these men and women on their own eras and across the decades. He not only rediscovers the integrity and commitment within these passionate advocates but also their fault lines.

West, in these illuminating conversations with the German scholar and thinker Christa Buschendorf, describes Douglass as a complex man who is both “the towering Black freedom fighter of the nineteenth century” and a product of his time who lost sight of the fight for civil rights after the emancipation. He calls Du Bois “undeniably the most important Black intellectual of the twentieth century” and explores the more radical aspects of his thinking in order to understand his uncompromising critique of the United States, which has been omitted from the American collective memory. West argues that our selective memory has sanitized and even “Santaclausified” Martin Luther King Jr., rendering him less radical, and has marginalized Ella Baker, who embodies the grassroots organizing of the civil rights movement. The controversial Malcolm X, who is often seen as a proponent of reverse racism, hatred, and violence, has been demonized in a false opposition with King, while the appeal of his rhetoric and sincerity to students has been sidelined. Ida B. Wells, West argues, shares Malcolm X’s radical spirit and fearless speech, but has “often become the victim of public amnesia.”

By providing new insights that humanize all of these well-known figures, in the engrossing dialogue with Buschendorf, and in his insightful introduction and powerful closing essay, Cornel West takes an important step in rekindling the Black prophetic fire so essential in the age of Obama.
Cornel West is a prominent and provocative democratic intellectual. A current professor at Union Theological Seminary, he has also taught at Yale, Harvard, and Princeton. The recipient of more than twenty honorary degrees, he has written many important books, including Race Matters and Democracy Matters. He appears frequently on Real Time with Bill Maher, The Colbert Report, Democracy Now, CNN, C-SPAN, and other national and international media. He lives in New York City.

Christa Buschendorf is a professor and the chair of American Studies at Goethe-Universität Frankfurt am Main. She has published on the transatlantic history of ideas and on African American literature.
“Lively, heated, fighting words...”
—Kirkus Reviews

“[West’s] mini-lectures, which frequently run uninterrupted for pages at a time, and Buschendorf’s instructive set-ups for them...convey a wealth of information.”
—Publishers Weekly

“A fascinating exploration of the black prophetic genius and fire of Douglass, Du Bois, King, Ella Baker, Malcolm X, and Ida B. Wells, this book reminds us what true leadership, sacrifice, and courageous, inspirational truth-telling looks like and why it is so urgently needed in the quest for justice today.”
—Michelle Alexander, author of The New Jim Crow