The Cruel Years: American Voices at the Dawn of the Twentieth Century (Paperback) 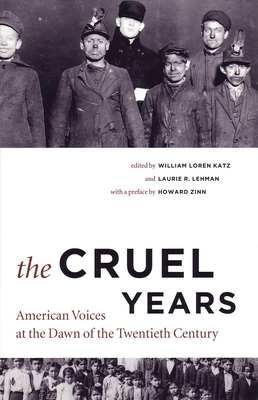 The Cruel Years: American Voices at the Dawn of the Twentieth Century (Paperback)


On Our Shelves Now
The Cruel Years provides readers with a vivid picture of what life was like a hundred years ago, not for the rich and famous but for ordinary working Americans. The story is told in the words of twenty-two fascinating people who lived by laboring long hours at farms and factories and mines. A preface by Howard Zinn and an introduction by William Loren Katz provide an easy-to-follow historical map that places these hard-hitting, first-person narratives in the context of their troubled times and within the larger picture of U.S. growth and development.

Here are the no-nonsense words of a young immigrant trying to survive as a sweatshop operator in New York City, a hard working farmer's wife who has writing ambitions; a black southern sharecropper seeking fulfillment under a new system of slavery; a young Puerto Rican passing the Statue of Liberty and ready for new challenges; a Chinese immigrant, a Mexican immigrant, and a Japanese immigrant struggling to rise from lower rungs on the social and economic ladder; an Irish girl of sixteen deciding to become a political agitator; a black southern woman trying to fend off the hurts of Jim Crow; a coal miner telling of the lethal dangers of his work; and a black cowhand rejoicing in the thrill of the cattle trails.
William Loren Katz is an award-winning author and historian. He is the author of more than forty titles, including the internationally acclaimed The Black West. Laurie R. Lehman, associate professor of education at Long Island University, has written extensively on culture and disability in U.S. education. They live in New York City.