END_OF_DOCUMENT_TOKEN_TO_BE_REPLACED

The Right to Stay Home: How US Policy Drives Mexican Migration (Paperback) 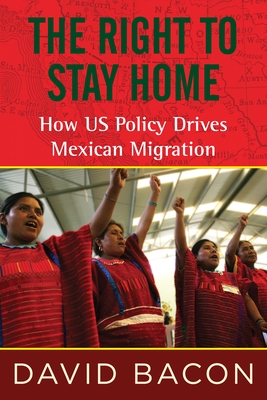 People across Mexico are being forced into migration, and while 11 percent of that country’s population lives north of the US border, the decision to migrate is rarely voluntary. Free trade agreements and economic policies that exacerbate and reinforce extreme wealth disparities make it impossible for Mexicans to make a living at home. And yet when they migrate to the United States, they must grapple with criminalization, low wages, and exploitation.

In The Right to Stay Home, journalist David Bacon tells the story of the growing resistance of Mexican communities. Bacon shows how immigrant communities are fighting back—envisioning a world in which migration isn’t forced by poverty or environmental destruction and people are guaranteed the “right to stay home.” This richly detailed and comprehensive portrait of immigration reveals how the interconnected web of labor, migration, and the global economy unites farmers, migrant workers, and union organizers across borders.

In addition to incisive reporting, eleven narratives are included, giving readers the chance to hear the voices of activists themselves as they reflect on their experiences, analyze the complexities of their realities, and affirm their vision for a better world.

Award-winning photojournalist, author, and immigrant rights activist David Bacon spent over twenty years as a labor organizer. Bacon’s previous books include The Children of NAFTA, Communities without Borders, and Illegal People (Beacon, 2008). He is an associate editor at Pacific News Service and writes for the Nation, American Prospect, Progressive, and San Francisco Chronicle, among other publications.

“An important contribution to the current immigration debate.” —Kirkus Reviews

“Americans mostly think of immigration in terms of its impact on the US. David Bacon’s work reminds us that migration has a profound impact on the places migrants leave from, just as surely as it does on the places they go to. He argues persuasively that the right not to migrate cannot be divorced from immigrant rights. The heart of his work is in human stories, and this book validates its ideas with vivid testimony, in migrants’ own words, from those most affected.” —John W. Wilhelm, president of UNITE HERE!

“Bacon’s book, which is enhanced by 11 personal narratives, will help readers gain a significantly more sophisticated understanding of the context and on-the-ground reality of undocumented migrants in the U.S.” —Publisher's Weekly

“Combining evocative personal narratives with penetrating geopolitical analysis, this compelling book vividly reveals the devastating effects on Mexico of the global class war of the past decades and their impact on the United States. Perhaps the most striking demand of the victims is ‘the right to not migrate,’ the right to live with dignity and hope, bitterly attacked under the neoliberal version of globalization.” —Noam Chomsky

“A must-read for organizers, immigrant advocates, policy wonks, and citizens who care about our history and values as a nation. This book puts a human face on the immigration debate, its impact on people on both sides of the border, and the indispensable elements of real comprehensive immigration reform—who got us into this mess and what we need to do to fix it.” —Eliseo Medina, international secretary-treasurer of the Service Employees International Union and former vice president of the United Farm Workers