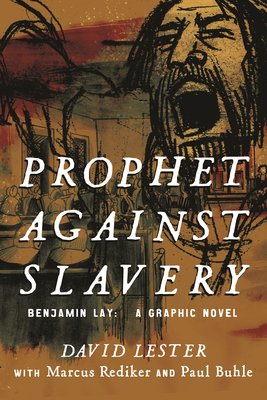 
On Our Shelves Now
The revolutionary life of an 18th-century dwarf activist who was among the first to fight against slavery and animal cruelty.

Prophet Against Slavery is an action-packed chronicle of the remarkable and radical Benjamin Lay, based on the award-winning biography by Marcus Rediker that sparked the Quaker community to re-embrace Lay after 280 years of disownment. Graphic novelist David Lester brings the full scope of Lay’s activism and ideas to life.

Born in 1682 to a humble Quaker family in Essex, England, Lay was a forceful and prescient visionary. Understanding the fundamental evil that slavery represented, he would unflinchingly use guerrilla theatre tactics and direct action to shame slave owners and traders in his community. The prejudice that Lay suffered as a dwarf and a hunchback, as well as his devout faith, informed his passion for human and animal liberation. Exhibiting stamina, fortitude, and integrity in the face of the cruelties practiced against what he called his “fellow creatures,” he was often a lonely voice that spoke truth to power.

Lester’s beautiful imagery and storytelling, accompanied by afterwords from Rediker and Paul Buhle, capture the radicalism, the humor, and the humanity of this truly modern figure. A testament to the impact each of us can make, Prophet Against Slavery brings Lay’s prophetic vision to a new generation of young activists who today echo his call of 300 years ago: “No justice, no peace!”
David Lester is the co-creator of the graphic novels The Listener and the award-winning 1919: A Graphic History of the Winnipeg General Strike. His poster of anti-war protester Malachi Ritscher was exhibited at the Whitney Museum of American Art in New York.

Marcus Rediker is Distinguished Professor of Atlantic History at the University of Pittsburgh. He is the author of The Fearless Benjamin Lay, on which this book is based.

Paul Buhle, a retired senior lecturer at Brown University, is the authorized biographer of C. L. R. James. He has edited more than a dozen nonfiction graphic novels, including Ballad of an American: A Graphic Biography of Paul Robeson.
“The inspiring life of Benjamin Lay, history’s first revolutionary abolitionist, gets an impressive, energetic graphic adaptation.”
—Shelf Awareness, Starred Review

“Lester (1919) captures the overlooked legacy of a fiery abolitionist who became the most disowned Quaker of his era in this raw graphic biography. . . . In documenting a life rife with cruelty and passion, Lester’s artwork is aptly grim and features rough linework that’s splashed with gray washes and black ink blots that evoke blood, smoke, and shadows.”
—Publishers Weekly

“Moving images, a passionate script, and a compelling narrative in one.”
—Broken Pencil

“Artist David Lester focuses on the dramatic actions and spiritual development of our bristly hero. He draws with a rough verve that suits his passionate subject. But underneath the expressionistic flourishes lie the structures of a brilliant visual storyteller. Lester never overexplains: Images speak for themselves in lucid passages of wordless panels.”
—Democratic Left

“Display[s] a nuanced empathy with Mecca’s subject . . . Will leave the reader pondering what it takes to put one’s body and social standing where [Benjamin Lay’s] mouth was.”
—Magnet Magazine

“A fascinating historical study and an implicit call to conscience.”
—Pittsburgh Post Gazette

“A guide to history that is often lost or buried.”
—Ormsby Review

“Lester’s raw, expressive visual approach perfectly delivers. Prophet Against Slavery is a crucial account of abolitionism’s religious framework, its courage and moral clarity often recast as sin or insanity, and the necessity of taking outside risks in pursuit of justice and equality.”
—Nate Powell, National Book Award–winning artist of the March trilogy about US congressman John Lewis

“The saga of Benjamin Lay is both unique and glorious. Historian Marcus Rediker and artist David Lester do a splendid job in bringing history to life.”
—Kate Evans, author and artist of Red Rosa: A Graphic Biography of Rosa Luxemburg

“Do you know the story of Benjamin Lay? Neither did I. These pages constitute the graphic apocrypha of the Prophet Against Slavery himself, brought to light by Lester’s thorough research, spare language, and stunning artwork. In unflinching terms, his expressionist drawings capture the passion and commitment of his subject.”
—Jason Lutes, author of Berlin