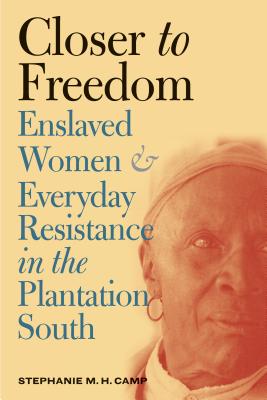 By Stephanie M. H. Camp
List Price: $32.50
Our Price: $27.50
(Save: $5.00 15%)
On Our Shelves Now
Recent scholarship on slavery has explored the lives of enslaved people beyond the watchful eye of their masters. Building on this work and the study of space, social relations, gender, and power in the Old South, Stephanie Camp examines the everyday containment and movement of enslaved men and, especially, enslaved women. In her investigation of the movement of bodies, objects, and information, Camp extends our recognition of slave resistance into new arenas and reveals an important and hidden culture of opposition.

Camp discusses the multiple dimensions to acts of resistance that might otherwise appear to be little more than fits of temper. She brings new depth to our understanding of the lives of enslaved women, whose bodies and homes were inevitably political arenas. Through Camp's insight, truancy becomes an act of pursuing personal privacy. Illegal parties (frolics) become an expression of bodily freedom. And bondwomen who acquired printed abolitionist materials and posted them on the walls of their slave cabins (even if they could not read them) become the subtle agitators who inspire more overt acts.

The culture of opposition created by enslaved women's acts of everyday resistance helped foment and sustain the more visible resistance of men in their individual acts of running away and in the collective action of slave revolts. Ultimately, Camp argues, the Civil War years saw revolutionary change that had been in the making for decades.
Stephanie M. H. Camp is associate professor of history at the University of Washington, Seattle.